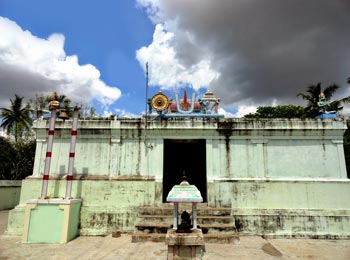 The deity of God Vishnu is worshipped at the holy Kalyana Varadharaja Perumal Temple which is located at Paruthiyur in Thiruvarur, Tamil Nadu. The river of Kudamurutti and a tributary of Kaveri River increase the beauty of the village Avanam Paruthiyur.

The deity of God Adhi Varadharaja Perumal is enshrined in the temple and it depicts him with a Prayoga Chakra. As per a belief, this Chakra was sent to protect King Ambarisha from the curse of a famous sage named Duruvasa. The sage created a demon out of his strand of hair to kill King Ambarisha. As the king was a staunch devotee of God Vishnu, he asked for God’s help. God Narayana’s Sudarshana suddenly appeared and destroyed the demon, keeping the King safe.

The deities of Panchaloka Utsava dates back to the 10th century and are made of bronze used in the Chola Dynasty. The deity of God Adhi Varadharaja Perumal is considered quiet fierce and due to this, another deity of God Vishnu in the form of Sri Kalyana Varadharajar was enshrined in the temple. These deities bless the devotees.

This temple was built around 19th century by a staunch devotee of God Vishnu named Paruthiyur Sri Krishna Shastri. He lived during the reign of King Serfoji II from 1773 to 1860 and was also called Ayyaval. He spent his time at the temple every day performing prayers and parayanams dedicated to God Vishnu. He also taught Ramayana and other scriptures to the people as a mode of promoting Hindu religion. He followed the Vaishnava traditions and tried to solve issues by answering the questions regarding the Dharma Sastram as well as Acharam. He and his brother Paruthiyur Sri Venkatesha Sastri Annaval were known to be the leaders of Paruthitur and Hindu Religion.

In the late 20th century, a devotee of God Rama named Mahaan Brahmasri Paruthiyur Krishna Sastri took care of the temple. He was a Pravachan pioneer, philanthropist and Ramayana exponent. Over the years he renovated the temple by installing the deities of various Gods and installing Melakulam, a temple tank of kodadhandarama theertham.

The festival of Vaikunta Ekadesi ad Rama Navami is celebrated with great joy at the temple.

The Kumbakonam Railway Station is nearest to the temple.

Frequent bus service is available from Kumbakonam to reach the temple.

The temple is open every day of the week for the public.