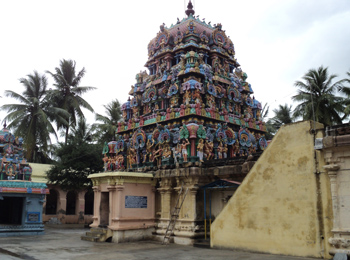 Sri Subramanian Swami Temple is located at Engan village of Thiruvarur district. The main God of the temple is Lord Shiva known as Brammapureeshwarar and the Goddess known as Periyanayagi. However, this temple is popular for Lord Subramania.

The temple was built during the rule of King Kulothungan II. Though a Shiva temple, Lord Murugan enjoys more importance here. The sancta to Bramapureeshwarar and Bramanayagi are east facing ones. There are also shrines to Dakshinamurthi, Nataraj Sivakami, Kasi Viswanatha, Bhairava, Arunachaleshwarar and other deities here.

Lord Murugan graces sitting on the peacock vehicle with His consorts, Valli and Deivanai. Of the 6 faces of the Lord, 3 are in front and 3 behind. The Lord holds Vel (spear), arrow, sword, discus, pasam (rope), trident, bow, armour, cock flag etc. in His 12 hands. The gap between the fingers is visible, which is a sculptural marvel. There are holes in each of the 12 ears, with provision for ear rings. The entire weight of the idol firmly balances on a single leg of the peacock.

Lord Murugan demanded Lord Bramma to explain the meaning of Pranava Mantra. He could not. Lord Murugan put Bramma in prison and took up the creation job too. Though Bramma was released later, he could not get back His work. Bramma began worshipping Lord Shiva with His eight eyes. When Lord Shiva asked Murugan to leave the job to Bramma, Murugan politely refused saying that He was not qualified for the job as He did not know the meaning of Pranava. Lord Shiva advised Murugan to teach the Mantra to Bramma and reinstate Him in his place. Lord Murugan obeyed His Father and taught Pranava to Bramma. As Bramma worshipped Lord Shiva with eight eyes (En Kan), the place also came to be known as Brammapuram.

Another interesting legend states that the sculptor who made the Subramania image of Sikkal was awe struck by its quality. He vowed that no other such image should be made. He had cut off his right thumb.

He was then prompted by Subramania in a dream, to sculpt another image for the shrine at Ettukkudi. When the image was complete, he blinded himself.

Again, a dream prompted him to create a third image of Subramania mounted on a peacock with the aid of a woman. When his chisel inflicted injury upon her, the blood splashed over his eyes, and in a flash he got his eyesight back. The first phrase that he uttered was ‘En Kann’ – hence the name of the temple.

A 14 day Thai Poosam-Brahmmotsavam in January-February is grandly celebrated here. A king named Simmavarman by name was cursed with a Lion’s face by a sage. For relief from the curse, the king prayed to Engan Lord Murugan. On a Thai Poosam star day (January-February) combined with Full Moon, Lord Murugan appeared before the king and restored his face. This day is grandly celebrated in the temple. Other festivals are monthly Krithika star days, 8 day Skanda Shashti in Aypasi (October-November), Karthikai in November-December, Maasi Karthikai (February-March), Diwali, Pongal, Tamil and English New Year Days.

The nearest airport is Trichy.

The nearest railway station is Thiruvarur.