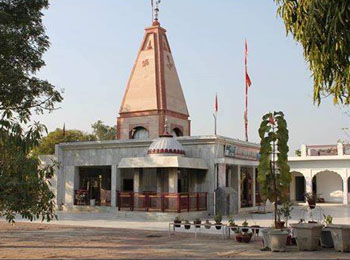 Jhateshwar Mahadev Temple is situated at Jhatwahar village on Rupnagar -Nurpurbedi road, about 5 km from village Bains in Rupnagar District of Punjab. Widely known as Shiva Temple Jhatwahar, this ancient temple is devoted to Lord Shiva.

The present building does not seem to be more than a hundred years old. It was built by Jai Dayal Sharma, a resident of the village Takhatgarh. There is clear evidence of an earlier temple at the site. In the remains, four carved pillars of sandstone can be attributed to about 10th - 11th centuries. There is also a mound near the temple which belongs to the medieval period.

The temple is visited by devotees from various parts of Punjab and also from the adjoining states of Haryana and Himachal Pradesh. During the month of Sawan (July-August), people visit in large numbers every Monday. Besides, a fair is held every year on Shivaratri in the month of February.

Ludhiana Airport is the nearest airport.

Buses are -the very common and cheap mode of transport available to reach the temple where government run buses are available that connect to the close by cities.