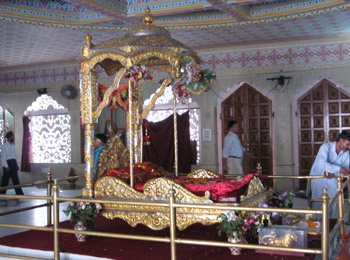 Jawalamukhi is a town in Kangra district in the Indian state of Himachal Pradesh. 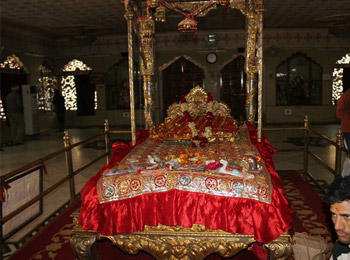 Jwalamukhi is a famous temple to the goddess Jwalamukhi, the deity of flaming mouth. Raja Bhumi Chand Katoch of Kangra, a great devotee of goddess Durga, dreamt of the sacred place and the Raja set people to find out the whereabouts of the site. The site was traced and the Raja built a temple at that location. The building is modern with a gilt dome and pinnacles, and possesses a beautiful folding door of silver plates. Under the gaze of the Dhauladhar range and set amidst the undulating hills that character sub-Himalayan Himachal Sati's tongue is believed to have fallen at Jwalamukhi and the goddess is manifest as tiny flames that burn a flawless blue through fissures in the age old rock. The temple located on a small spur on the Dharamsala-Shimla road at a distance of about 20 km from the Jwalamukhi Road Railway Station attracts hundreds of thousands of pilgrims every year. No idol is located in the temple and the deity is worshipped in the form of flames which come out from the crevices of the rock. There is a small platform in front of the temple and a (check usage) big mandap where a huge brass bell presented by the King of Nepal is hung. Usually milk and water are offered and the ahutis or oblations are offered to the sacred flames in the pit, situated in the centre of the temple in between the floor pillars supporting the roof. The deity is offered Bhog of Rabri or thickened milk, Misri or candy, seasonal fruits, milk. There is a mystic Yantra or diagram of the goddess, which is covered with, shawls, ornaments and mantras are recited. The puja has different 'phases' and goes on practically the whole day. Aarti is performed five times in the day, havan is performed once daily and portions of Durga Saptasati are recited. The temple is closed from 11.30am to 12.30pm for Aarti. The Mughal Emperor Akbar, on learning about the legends of Jwalamukhi, tried to douse the flames with a stream of water but could not succeed in doing so. Out of reverence, Akbar offered a Gold umbrella (Chatra) to the Goddess, but the umbrella turned into an unknown metal suggesting that the Goddess did not accept his offering.

Maharaja Ranjit Singh paid a visit to the temple in 1815 and the dome of the temple was gold-plated by him. Just a few feet above the Jwalamukhi temple there is a six-foot deep pit with a circumference of about three-feet. At the bottom of this pit there is another small pit about one and a half feet deep with hot water bubbling all the time. The shrine is regarded as a Maha Shakti Peetham. It is believed that Sati Devi's tongue fell here. Shakti Peethas are shrines of Devi, the primodial Mother Goddess. Each Shakti Peetha has a shrine for the Shakti and Bhairava. Siddhida (Ambika)is the Shakti and Unmatta Bhairava is the Kalabhairava. The mythology of Daksha yaga and Sati's self immolation had immense significance in shaping the ancient Sanskrit literature and even had impact on the culture of India. It led to the development of the concept of Shakti Peethas and there by strengthening Shaktism. Enormous mythological stories in puranas took the Daksha yaga as the reason for its origin. It is an important incident in Shaivism resulting in the emergence of Shree Parvati in the place of Sati Devi and making Shiva a grihastashrami (house holder).

The temple is identified as one among the 52 Shakti Peethas. It is also one of the most renowned temples dedicated to Goddess Durga. 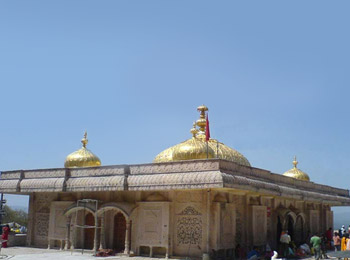 Jwalamukhi refers to the deity with flaming mouth. As per the legends, the mouth of Sati fell here at the time of self-sacrifice. Ever since, the Goddess occupied the place and she manifested in nine flames. After years, one day Raja Bhumi Chand Katoch, a resident of Kangra and a great devotee of Goddess Durga, dreamt of the holy place. He sent his men to locate the place. With the grace of the Goddess, the site was found and Raja started constructing a temple. It is believed that Pandavas also contributed in the erection of this temple. However, the construction of this temple was completed in the 19th century, when Maharaja Ranjit Singh and his son, Kharak Singh, gave the Gold and Silver for the dome and door respectively.

Legend about Akbar, the Mughal Emperor

During the ruling period of Akbar, he learned about the legends of Jwalamukhi. In a fit of anger, he tried to douse the flames with a stream of water. The great power of the Goddess, still kept the flames burning. Realizing the power of Jwala Devi, Akbar came with his army to this temple. He brought a Gold umbrella (Chatra) for the Goddess, but on offering, the umbrella turned into an unknown metal suggesting that the Goddess didn't accept his offering.

During the entire day, there are in total five aartis conducted in the temple. The first aarti is performed early in the morning at around 5 am and is known as the Mangal aarti. The next aarti is carried out at the time of sunrise and is called Panjupchaar Pujan. At around midnoon, it is time for yet another aarti, Bhog Ki Aarti. The evening aarti at around 7 pm is simply called aarti while the last one at around 10 pm is known as the Shaiyan ki aarti. The last aarti at the Jwalamukhi Temple is particularly unique since it is only here that such an aarti is conducted. During the aarti, the bed of the goddess is decorated with beautiful dresses and jewelleries. The aarti is performed in two parts. The first one is in the main temple while the second one is performed in the sejabhavan. Slokas from 'Sondarya Lahri' by Shri Shakracharya are recited throughout the aarti. Havan is also performed once a day and parts of Durga Saptarshi are recited during it. Offerings made before the goddess in puja include bhog of rabri or thickened milk, misri or candy, seasonal fruits and milk.

The temple can be visited throughout the year but the best time to visit the temple is between the months of September and October when colourful fairs are held during the Navratri celebration.

For tourists desirous of visiting the temple, the closest airport is at Gaggal which is around 50 km away. Chandigarh airport and railway station is at a distance of around 200 km.

The nearest railhead is a narrow gauge one at Ranital, 20 km away.

The temple is also well connected by road. State transport buses from cities of Punjab and Haryana are available. Taxis are also there to take you to the Jwalamukhi temple.