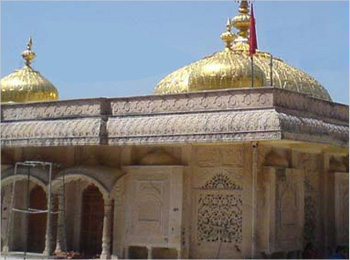 The Jwalamukhi Temple is dedicated to Shakti and is located in Kangra, Himachal Pradesh, India. The Jwalamukhi temple is built at what is said to be the spot where the half burnt tongue of Sati fell. The uniqueness of this temple is that there is fire everywhere. There are 9 flames here, each representing the different forms of the goddess Saraswati, Annapurna, Chandi, Hing Laj, Vindhya Vasini, Mahalakshmi, Mahakali, Ambika and Anjana. This is one of the 51 Shakti Peethas that are situated in India. The temple is located to the 35 kilometres south of Kangra in Jwalamukhi in Himachal Pradesh. It is dedicated to Jwalamukhi, or the Goddess of Light also known as the Flaming Goddess. The temple is located overlooking the Dhauladhar range. 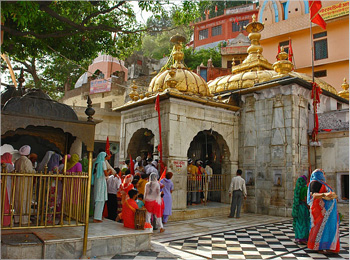 The temple is constructed in a modern design. It has a dome that is crafted out of gold and the temple has a beautiful folding door that is crafted out of silver plates. There is also a small platform attached to the front, which can be seen before one enters the mandap where a huge brass bell hangs. The bell was gifted by the King of Nepal and adorns the hall. The lamp burns endlessly and the flame is positioned in a square central pit of hollowed stone. A musical fountain is found near this. 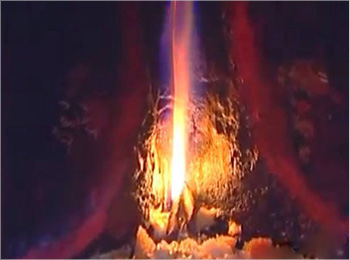 Interestingly, in this temple, there is no idol of the Goddess. The devotees visiting the temple consider the flames as the Goddess and pay their respects. The flames found inside the premises of the temple can be seek jetting out of cervices of the rocks. The fire is said to be fueled by natural combustible gas. 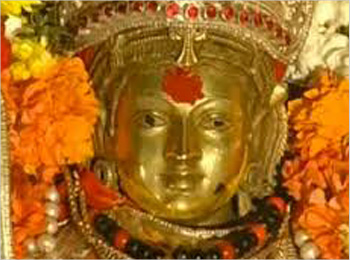 According to Hindu mythology, when Lord Vishnu cut through the corpse of Sati, her tongue fell off the corpse at this site. Indeed, even the Pandavas are respected to have gone by this sacrosanct spot. The sanctuary comprises of a copper channel which exudes common gas which is lit by the sanctuary's cleric to frame an impeccable blue fire. The fire is worshiped as the appearance of the goddess Jwalamukhi. Some additionally trust that Jwalamukhi speaks to the flaring mouth of Jalandhara, the evil presence who was pulverized to death by Lord Shiva. The flares are accepted to originate from his mouth. Nine flares have been named after the goddesses Mahakali, Annapurna, Chandi, Hinglaj, Vidhya, Basni, Maha Lakshmi, Saraswati, Ambika and Anji Devi which blaze ceaselessly.

It is trusted that Raja Bhumi Chand Katoch of Kangra, who was an extraordinary enthusiast of Goddess Durga, longed for the consecrated place and set individuals to follow its whereabouts. In the wake of finding the site, the Raja raised the sanctuary at that very area. Legend has it that Akbar, the colossal Mughal Emperor, went to the sanctuary visited the temple to test its innovation after he was made mindful of the legend. Akbar attempted to drench the blazes with a surge of water, yet shockingly, the immense force of the Goddess still kept the flares smoldering. Recognizing the force of Jwala Devi, Akbar took his armed force to the sanctuary and offered a gold umbrella (Chatra) for the Goddess, however not long after subsequent to offering the vault, the umbrella transformed into copper recommending that the Goddess declined his advertising. Akbar turned into an aficionado of the Goddess with most extreme modesty.

The devotees paying respects to the deity of flaming tongue seek fulfillment in any endeavour then undertake. During their prayers, the devotees offer water and milk.

Every day many poojas chanting Durga Saptha Shati are conducted in the temple. Apart from poojas, arati is also offered to Mother Jwalamukhi five times a day.

People approach this temple with prayers to drive away evil effects, and for tantriks to perform yantra pujas here in the temple. So, those afflicted with the evil effects of witchcrafts and black magic come here for relief and mental peace. Devotees offer milk and water to Mother as their prayer commitment.

Accommodation facilities are available in Kangra. Hotel Jawalaji ,run by Himachal Tourism Development Corporation HPTDC, is one of the best deluxe hotels in Jwalamukhi. This hotel is situated 360m away from the holy shrine and 100m from the nearest bus station. It consists rooms with all decent amenities. Apart from this there are a number of budget hotels, Dharamsala and Sarai nearby where one can get the rooms at affordable charges.

The temple can be visited throughout the year but as colourful fairs are held during the Navratri celebration, the months of September and October are considered as the best time to visit temple.

In Jwalaji Devi Temple at Jwalamukhi, every day five Aartis are performed by temple Pujaris. One aarti is performed in Brahma Mahurat, one at sun rise about one hour after the first one, one at mid noon, one in the evening and one at the bed time of the Goddess.

This aarti is performed in Brahma Muhurtha Kaal,the timing is around 04:30 AM in the summers and 05:00 AM in Winters. Prasad of Malpua(Indian Pancake),Khoa/Mawa(made of either dried whole milk or milk thickened by heating in an open iron pan) and Misri(Rock Sugar) is offered to Maa Jawalaji.

This Aarti takes place around half an hour after the First Aarti, peele chawal (yellow rice) and Dahi(Yogurt) is offered is offered as prasadam to Maa Jwalaji.

This Aarti is performed at mid Noon. Rice, six Kind of Different Pulses and Sweets are Offered to Maa Jwalaji.

This Aarti is Performed in the Evenings, Halwa(Indian Sweet made of Flour) Poori and chanaa is offered to Mata Jwalaji.

Before the last prayer in the late evening this Aarti takes place.It is the bedtime aarti of Maa Jwalaji and this prepare Maa's bed to sleep. The bed of Goddess is decorated with rich dresses and ornaments during aarti. First part of it is done in the main temple of Goddess and the second part is done in the 'Seja bhavan'. Pandits/Pujaris recite Salokas from Shri Shakracharya's 'Soundarya Lahari's.

This temple also known as unmat Bhairav is dedicated to Lord Shiva. It is believed that wherever Sati Mata's limbs fell, Lord Shiva always has a presence there. Sati mata is called as Amba ji and Lord shiva is called as mahadev eshwar. So by indicating the both names this mandir is called Ambikeshwar Mahadev.

The closest airport is at Gaggal and is 46 km from Jwalamukhi. The closest broad gauge railhead is at Pathankot, 123 km away. By road, from Delhi, the distance is 473 km and from Shimla is 212 km.