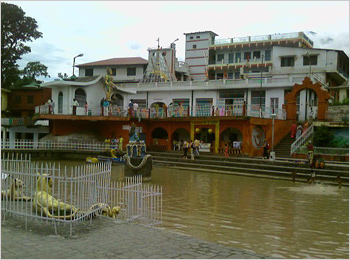 The Chamunda Devi temple is located in Himachal Pradesh. It is situated on the banks of River Ban Ganga. Every year, a large number of devotees travel to this holistic destination of Himachal Pradesh to get blessings of goddesses 'Chamunda' (Hindu deity). Chamunda Devi Temple is located at distance of 15 km from Dharamsala and at a distance of 10 kms from Palampur. Chamunda is a little station on the Pathankot-Jogindernagar narrow gauge railway track. There is the Chamunda Devi Temple, right on the banks of the Baner River. It is also a pretty picnic spot with a good view of the mountains. 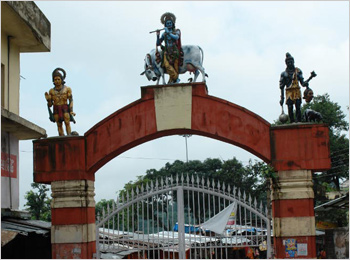 There is nothing extra-ordinary about the architecture of this temple, but the divine aura spell bounds the devotees with its spiritual appeal. Chamunda Devi is worshipped daily while the sermons include 'Aartis' at intervals. Reciting the hymn of 'Shat Chandi' with devoted heart at this temple is considered auspicious. In the corner of the temple, one can see small footsteps of the Goddess on a stone. Besides the main shrine, there is a marble staircase that takes down to the cave of Lord Shiva. This is a cave-like scoop where Shiva Lingam is placed. People visit this cave and worship Lord Shiva with great devotion. Lord Shiva is said to be one of the complex Gods of the Hindu pantheon, since he is the destroyer as well as the restorer. Here, Lord Shiva is believed to have been present in the form of death, destruction and dead bodies. One can also observe ancestral worship near the banks of Ban Ganga River. In the vicinity of this temple, there is a cremation ground that serves to 22 villages of the nearby areas.

In the temple complex, there is a huge pond with images of Lords and people can take bath here. There is sculpture of Goddess, in which, she is garlanded with serpents, scorpions, and skulls. During the time of Navratras, the temple is crowded by large number of people. Pilgrims from far and near come to visit this temple of great legacy and religious importance. Chamunda Devi blesses all her true devotees. The temple is situated in the picturesque beauty of lush green mountains. Many saints can be seen here involved in penance and meditation. In the past days, the image of the Goddess was situated on the hill above the present site of the temple. The site was found to be in a remote area, where it was not possible for everyone to reach and moreover, it was quite risky. There is a story behind the establishment of this temple. 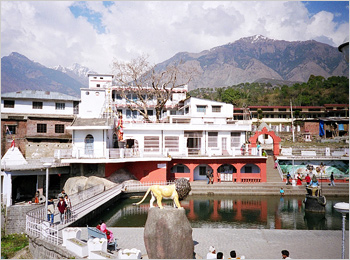 Chamunda also known as Chamundi, Chamundeshwari and Charchika, is a fearsome aspect of Devi, the Hindu Divine Mother and one of the seven Matrikas (mother goddesses). She is also one of the chief Yoginis, a group of 64 or 81 Tantric goddesses, who are attendants of the warrior goddess Durga. The name is a combination of Chanda and Munda, two monsters whom Chamunda killed. She is closely associated with Kali, another fierce aspect of Devi. She is sometimes identified with goddesses Parvati, Chandi or Durga as well. Chamunda Devi Mandir is believed to be the abode of 'Shiva and Shakti'. Due to this reason, it is also known as 'Chamunda Nandikeshwar Dham'. In the temple, the main image is visible from the main entrance. The main shrine is adored by the images of Lord Bhairav and Lord Hanuman on its sides. Actually, these lords are considered as the guards of the Goddess. The main image of the Goddess is visible draped in rich clothes. 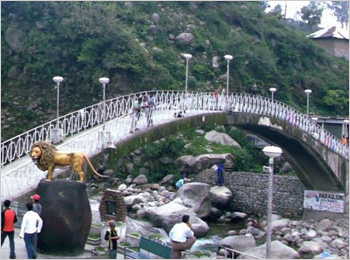 The legend of the temple is related with two demons Chanda and Munda of Shumbh Nishumbh, the notorious demon king. With their wicked mind, they try to harass the goddess Ambika, which turned out in the form of battle between the gods and demons. Chamunda, emerged as Chandika from an eyebrow of goddess Ambika, was assigned the task to eliminate the demons. Chandika destroyed those two demons and presented their heads in front of Ambika. Pleased with the act of Chamunda, the goddess Ambika named the city as Chamunda and since then the temple Chamunda Devi is worshipped with that grace and faith.

Legend behind the relocation of the Temple 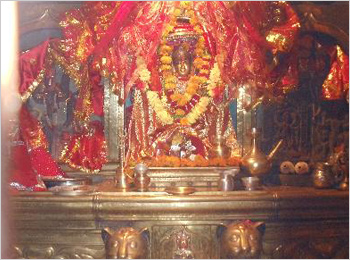 Around 400 years ago, a King and a Brahmin priest prayed to Chamunda Devi asking her consent to shift the image to an accessible location. Chamunda Devi appeared in a dream to the priest granting him the permission. She asked him to dig a certain area and subsequently, they will find an ancient idol. They can brought the idol in the temple and worship her. The priest told about the dream to the King and sent his men to bring the idol. The men got the idol, but they could not lift it. Again, the Goddess appeared and asked the priest that the men could not lift the idol because they took it as an ordinary stone. She told the priest to get up early in the morning and take a bath. After wearing fresh clothes, he should go to the place in a devoted manner. The priest did the same what was told to him. He found that he could lift the idol easily. He placed the idol in its present location and from that time, the Goddess is worshipped by people.

Chamunda Devi Temple witnesses a big rush of devotees, especially during the Navratris. During "Shravan Ashtami" during the month of July-August, a grand fair is held here.

The nearest Airport is at Gaggal which is connected with New Delhi and Chandigarh by Indian Airlines Flights.

Regular Bus and Taxi services are available from Pathankot, Delhi and Chandigarh. Tourists can hire private taxis from Palampur or Dharamsala to reach the temple. Besides, state transport bus services are also available to reach this place.