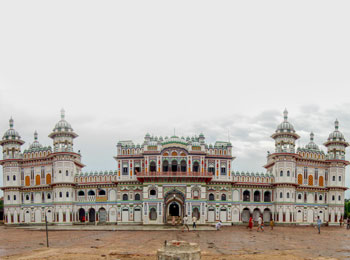 Janaki Mandir is a Hindu temple of Janakpur in Mithila region of Nepal, dedicated to the Hindu goddess Sita. It is the primary temple of Maithali native indigenous to Nepal.

As he name indicates, this temple is dedicated to Mata Janki (Sita), who was the consort of Lord Rama. Janki temple is regarded as the most important religious site of the town. Janakpur is also characterised by the presence of numerous ponds and are considered sacred. At present most of them dried up or were encroached due to mismanaged urbanization, killing the beauty of the ancient heritage.This historical town houses many ancient temples,monasteries, arts and crafts of many deities.

The temple is also known as Naulakha temple as nine lakhs rupees of that time was the construction cost of the temple.

The temple is popularly known as the Nau Lakha Mandir (meaning "nine lakhs"). The cost for the construction of the temple was about the same amount of money: rupees nine lakhs or nine hundred thousand, hence the name. Queen Vrisha Bhanu of Tikamgarh, India built the temple in 1910 AD.

In 1657, a golden statue of the Goddess Sita was found at the very spot, and Sita is said to have lived there. The legend said it that it was built on the holy site where Sannyasi Shurkishordas had found the images of Goddess Sita. In fact, Shurkishordas was the founder of modern Janakpur and the great saint and poet who preached about the Sita Upasana (also called Sita Upanishad) philosophy. Legend has claimed it that King Janak(Seeradhwaj) performed the worship of Shiva-Dhanus on this site.

As of 26 April 2015 the temple is reported to have partly collapsed from the earthquake in April 2015.

It is an example of Hindu-Rajput Nepali architecture. It is often considered the most important model of Rajput architecture in Nepal. Fully built in bright white and constructed in an area of 4,860 sq. feet in a mixed style of Islamic and Rajput domes, the temple is 50 meters high. It is a three-storied structure made entirely of stone and marble. All its 60 rooms are decorated with the flag of Nepal, colored glass, engravings and paintings, with beautiful lattice windows and turrets. According to legends and epics, King Janak ruled this area (called Videha) during the Ramayana period. His daughter Janaki (Sita), during her swyambar, had chosen Lord Rama as her husband, and become queen of Ayodhya. Their marriage ceremony had occurred in the nearby temple.

The legend is narrated in Hindu epic Ramayana. According to it Mata Janki is described as the daughter of Earth Goddess and adopted by King Janak and Queen Sunaina.

King Janak found her while ploughing as a part of Yagna. Mata Janki is also known as Vaidehi, Maithili, Sita and she is the central female character in Hindu epic Ramayana. Lord Ram is supposed to be the Avatar of Lord Vishnu and Sita as Avatar of Mata Lakshmi.

Sita is an ideal example of dedication, self-sacrifice, courage and purity. According to Rigveda Sita is a Goddess who blesses the land with good crop.

There are many festivals organised here in which the devotees from India Nepal and locals gathers in large numbers. The main festivals are -Ram Noami - is the birthday of Lord Ram, Vivah Panchami – the day commemorates the marriage of Lord Ram and Mother Sita. The idol of Ram and Sita in the form of a procession is circulated around the town with joy and vigour. The devotees in thousands from India and Nepal participate in these processions every year.

How To Reach Janaki Mandir

Nepal has good roads. One can enter Nepal by any check post on the boarder. Buses from every major cities of Nepal are available for Janakpur. Jaynagar is a railway station of Indian railway connecting Delhi and rest of India. From Jaynagar a narrow gauge train for Janakpur is operational being the only train connecting India and Nepal. Travelling by this train may be a unique experience in one's life. Janakpur has a domestic airport with most of the flights connects it to Kathmandu.