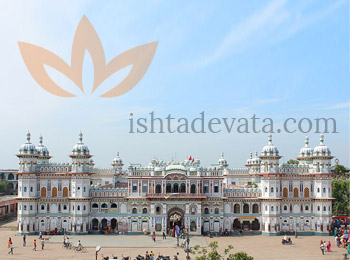 The Mithila Shakti Peeth is situated in Mithila in Bihar, India. It is among the 51 Shakti Peeth of Maa Sati. It is said that, the left shoulder of Maa Sati fell here, when lord Vishnu in order to relieve lord Shiva from grief of losing his wife Sati, used his ‘Sudarshan Chakra’ to incise maa Sati Body. Then, at the place of fall of left shoulder, this temple was constructed. Instead, a famous Siddha peetha of a divine power is worshipped as a superlative power of Durga Shakti “Mahadevi” by the millions of devotees from all over the country, who visit this prehistoric divine temple every year.

From afar this temple is like a fort. It is white and has four ‘minar’ type towers embedded in to the structure, and it looks really adorable. Just in front of the temple there is a small fountain that looks fantastic in night when light falls on it. There is a wide door (around 30 m high) to enter in to the temple and it is more of Taj Mahal like gate. All around the temple ample amount of greenery is there. The place is known for the other histories present in the great holy epic Ramayana of Hindus. Since Janakpuri is known as the birth place of Sita Mata (Wife of lord Rama) and her father, the famous king of Janak used to rule this region. The people have a wrong conception of believing the Janki madir as the popular Shakti peeth. An ancient Shakti temple at this place is also known as Sona mai mandir. Mithilachal is also known as Durgasthan or the place for Devi Bhagavati.

The temple is dedicated to Goddess Durga. The main idols of this legendary divine place are Devi as “Mahadevi or Uma” and Lord Shiva as “Mahodar”(a brave one). The idols of Lord Shiva and Maa sati is situated on mountain rock and so does the temple.

Legend has it that Maa Sita (Wife of lord Rama) born here and her father, the famous king of Janak used to rule this region. History to this place dates back in the time when it is said that the Left Shoulder of Maa Sati fell to this place. Best information about the origin and the formation of this temple, people can mingle with local people.

Navratri is a major festival here. Navratri are celebrated for over 9 days, with some people not eating any type of food that is derived from the soil for these nine days. Special ceremonies and rituals are carried during these days. Another festival that is celebrated with great enthusiasm is the ‘Shivaratri’ and during this day, people keep fast, pour milk on the Shiv Lingam and offers ‘Bail’ (A type of fruit) to the god idol. People (Almost every day) offer their offering to the god in form of fruit, milk, homemade sweets etc. Ram Navami is also major festival here and it is celebrated with great enthusiasm. Krishna Janmashtami also celebrated with great devotion and faith. Holi, is another major festival that includes playing with colors and greeting each other on this auspicious day. Some of the other festival being celebrated here are Saraswati Puja, Navaratri , Durga Puja, Kali Puja, Diwali, Karthik Purnima, Akshaya Navami, Nag panchami, Raksha bandhan (Famous festival for brother and sister) and Madhu Shravani.

The Nearest Airport is the Patna Airport. The Nearest Railway station is Janakpur station. There are many public and private vehicles available to reach Mithila-Ma Uma devi Shakti Pith Temple Janakpur Bihar.