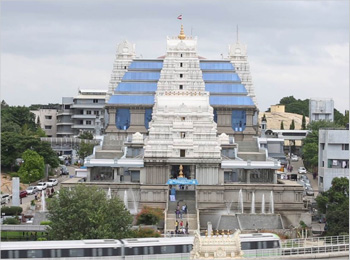 
The Sri Radha Krishna Temple houses the deities of Radha and Krishna and is situated in Rajajinagar, in Bangalore. It is one of the largest ISKCON temples in the world. The temple is a huge cultural complex that was inaugurated in 1997 by Shankar Dayal Sharma. 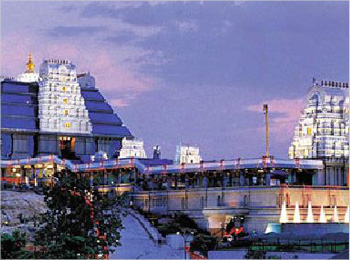 The temple is situated atop the Hare Krishna Hill. In 1976, devotees from different parts of India and the world had initiated activities of ISKCON in different parts of South India like Bangalore, Hubli, Madras, etc. Sankirtans in the streets, enrolling Life Members, arranging programs in the houses, and arranging large public programs in pandals were being conducted. In May 1997, Bangalore ISKCON Temple was inaugurated by His Holiness Jayapataka Swami and the ninth president of India - Shankar Dayal Sharma. There is a gold-plated dhwaja-stambha (flag post) 17 m (56 ft) high and a gold plated kalash shikara 8.5 m (28 ft) high. There is free distribution of Sri Krishna prasadam to all visitors during the darshana hours. 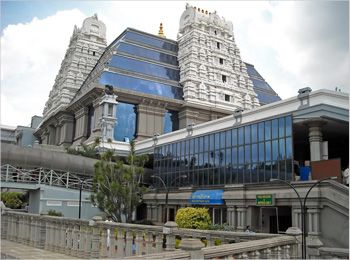 The Supreme Personality of Godhead, Sri Krishna incarnated Himself as Sri Rama in the month of Chaitra (Mar-Apr), on the ninth day of the growing moon (Chaitra Masa Shukla Paksha Navami Tithi). He appeared as the son of Dasharatha, the King of Ayodhya. Sri Brahmotsava Brahmotsava is an annual festival celebrated for 12 days in the month of Chaitra (Mar-Apr) to commemorate the appearance of the Deities on Hare Krishna Hill. Sri Narasimha Jayanti Sri Narasimha Jayanti is the appearance day of Lord Narasimha, the half-lion half-man incarnation of Supreme Lord Krishna, who appeared to protect Prahlada from his demoniac father Hiranyakashipu. 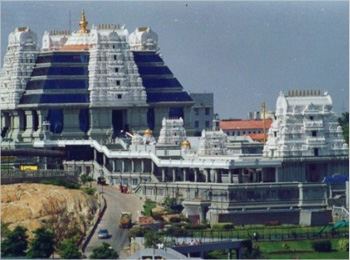 Hanuman Jayanti is celebrated to commemorate the birth of Sri Hanuman, an ardent devotee and eternal servitor of Lord Sri Ramachandra. Panihati Chida-Dahi Panihati is located in the state of West Bengal, on the banks of the Ganges River (10 miles north of Kolkata). It was one of the leading trade centers in earlier days when the river route was the main means of communication. Garuda Panchami Garuda Panchami is a festival celebrated to commemorate the birth of Garuda, an ardent devotee and the bird carrier of Lord Vishnu. 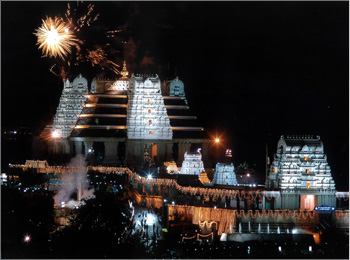 Jhulan Festival is celebrated in the month of Shravana (July-August) commemorating the pastimes of Lord Sri Krishna while enjoying His childhood with friends. Sri Balarama Purnima The auspicious appearance day of Lord Balarama, the elder brother of Lord Sri Krishna, is celebrated on the full-moon day of Shravana (July-August). Sri Krishna Janmashtami Sri Krishna Janmashtami is the celebration of the appearance of Lord Krishna on the eighth day (ashtami) of the waning moon (Krishna paksha) in the month of Bhadra (August-September). Vyasa Puja The appearance day of Srila Prabhupada, the founder-acharya of ISKCON is celebrated as Vyasa Puja. Srila Prabhupada was born in 1896 on the day of Nandotsava (the next day of Janmashtami). Radhashtami Radhashtami is celebrated on the eighth day of the bright fortnight (shukla paksha ashtami) in the month of Bhadra (August-September). It is a very significant festival for the devotees. ISKCON Bangalore celebrates Vamana Dvadashi – the appearance day of Lord Vamanadeva. The Deity of Lord Sri Krishna is decorated as Vamanadeva wearing a saffron robe and holding a staff, an umbrella and a water pot (kamandalu). Since we have to break the Ekadashi fast on the day of Dvadashi, the Vamana Dvadashi fasting till noon is done on the previous day (Ekadashi). Deepotsava Deepotsava, also known as the festival of lights, is celebrated in the month of Kartika (October-November) every year. It is a month-long festival commemorating Damodara-lila. Govardhana Puja Govardhana Puja is celebrated in the month of Kartika (October-November) to commemorate the pastime of Lord Sri Krishna lifting the Govardhana Hill to protect the residents of Vrindavana from the wrath of Indra. Sri Vaikuntha Ekadashi Vaishnavas (devotees of Lord Vishnu) observe Ekadashi Vrata and engage in remembering the Supreme Lord by chanting His Holy Names and singing His glories. Sri Krishna Balarama Ratha Yatra Srila Prabhupada, the founder-acharya of ISKCON introduced this Ratha Yatra festival in ISKCON centers around the world. Sri Nityananda Trayodashi Sri Nityananda Trayodashi is the auspicious appearance day of Nityananda Prabhu. The Supreme Lord Sri Krishna appeared in Navadvipa as Sri Chaitanya Mahaprabhu to establish the Sankirtana Movement. 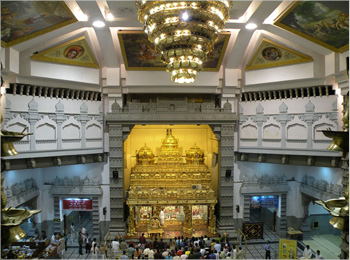 The temple is open from 4:15 am to 5:15 am. The day begins with a grand arati ceremony called mangala-arati followed by worship of Tulasi, Narasimha Arati and Suprabhata Seva for Sri Srinivasa Govinda. The temple again opens at 7:15 am for Shringara Darshana Arati. 5:15 am to 7:15 am: Japa Meditation. The temple remains open till 1:00 pm. In the evening the temple is open from 4:15 pm to 8:20 pm. The evening arati starts at 7:00 pm where devotees sing along with priest. In the main temple the arati is performed by three priests. This arati is followed again by aratis where devotees can be seen dancing to the rhythm of "hare krishna hare rama".


ISKCON Sri Radha Krishna Temple is located in North Bengaluru. It is well connected to the rest of the city through various modes of transport.


Bangalore has an international and domestic Airport


It is well connected with other states and cities in India. There are trains from capital of every state to this city