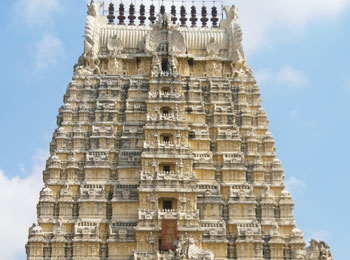 The Ekambareswarar Temple is one of the famous Hindu temples dedicated to Lord Shiva, located in Kanchipuram in the state of Tamil Nadu, India. Kanchipuram. It is one of the five major Shiva temples or Pancha Bootha Sthalams (each representing a natural element) representing the element - Earth. The other four temples in this category are Thiruvanaikaval Jambukeswara (water), Chidambaram Natarajar (ether), Thiruvannamalai Arunachaleswara (fire) and Kalahasti Nathar (wind).

The temple covers an area of over 23 acres (93,000m2). Reaching a height of 59 meters, the temples Raja gopuram (the entrance tower to the temple) is one of the tallest in South India. One notable feature of the temple is the Aayiram Kaal Mandapam, or the "hallway with a thousand pillars", which was built by the Vijayanagar Kings. The temples inner walls are decorated with an array of 1,008 Siva lingams. The campus is 25 acres with 5 prakarams (or courtyards) and has a thousand-pillared hall. Kampai Tirtha, the temple tank is believed to have an underground holy river. The fourth courtyard contains a small Ganesha temple and a pond. The third courtyard contains lot of smaller shrines. The sanctum sanctorum contains the lingam along with the image of Shiva.

There is no separate shrine for Parvati within the complex as with other Shiva temples in Kanchipuram. A local belief is that Kamakshi Amman Temple is the consort for Ekambaranathar. There is a small shrine for Vishnu named Thiru Nilaaththingal Thundathan inside the temple complex. Vishnu is prayed as Vamana Murthy and the shrine is hailed by the Alvar saints as one of the 108 Divya Desams. The sthala-virutcham or temple tree is a 3,500-year-old mango tree whose branches are said to yield four different types of mangoes from its four branches.

There are inscriptions dated 1532 CE (record 544 of 1919) indicating the gift of number of villages made by Achutaraya. Vira Narasingaraya Saluva Nayaka who was directed by Achutaraya broke the royal order by giving more lands to Ekambaranathar temple than the Varadaraja Swamy temple against the instruction of an equal gift to either of the temples. Achutaraya on hearing this equally distributed the lands to both the temples.

The presiding deity here is Ekambareswarar or Shiva, worshipped as the Prithivi Lingam. Lord Shiva in the temple is a swayambumurthi. The sand Shivalinga made by Mother Kamakshi adores the sanctum sanctorum. The hand symbol of Mother embracing the Lord is still visible on the Linga. A Somaskanda panel featuring Shiva, Parvati and Skanda adorns the rear of the main shrine, which has been held in worship for centuries together.

Legend has it that once Parvati, the consort of Shiva was doing penance under the temples ancient Mango tree near Vegavathi river. In order to test her devotion Shiva sent fire on her. Goddess Parvati prayed to her brother, Vishnu, for help. In order to save her, he took the Moon from Shiva's head and showed the rays which then cooled down the tree as well as Parvati. Shiva again sent the river Ganga (Ganges) to disrupt Parvati's penance. Parvati prayed to Ganga and convinced her that both of them were sisters and so should not harm her. Subsequently, Ganga did not disturb her penance and Parvati made a Shiva Linga out of sand to get united with Shiva. The God here came to be known as Ekambareswarar or "Lord of Mango Tree". According to another legend, it is believed that Parvati worshipped Shiva in the form of a Prithivi Lingam (or a Lingam improvised out of sand), under a mango tree. Legend has it that the neighbouring Vegavati river overflowed and threatened to engulf the Shiva Lingam and that Parvati or Kamakshi embraced the Lingam. Shiva touched by the gesture materialized in person and married her. In this context he is referred to as Tazhuva kuzhainthaar ("He who melted in Her embrace") in Tamil.Tiurkuripputhonda Nayanar, one of the 63 saivite saints, called nayanars was a washerman in near the temple and he washed the clothes of all the Saivities. He was divinely tricked by God Shiva appearing as an aged brahmin and asked him to wash before dawn. At the same time Shiva made a cloudly evening. On observing the approach of the evening, the washerman banged his head in a stone in disappointment. God appeared in his true form and graced his devotee.

This vast temple is one of the most ancient in India having been in existence since at least 600 AD. Second century AD Tamil poetry speaks of Kama kottam, and the Kumara kottam (currently the Kamakashi Amman temple and the Subramanya temple). Initially temple was built by Pallavas. The Vedantist Kachiyapper served as a priest at the temple. The existing structure then, was pulled down and rebuilt by the later Chola Kings. Adi Sankara, the 10th-century saint got Kanchipuram remodelled along with expansion of this temple along with Kamakshi Amman temple and Varadaraja Perumal Temple with the help of local rulers.The Vijayanagar kings, during the 15th century, also made lot of contributions to the temple and later developed by Vallal Pachiyappa Mudaliar used to go regularly from Chennai to Kanchipuram to worship in this temple, he spent significant money he amazed during British rule on the temple renovation, Pachiyappa Mudaliar seated at horse back can be seen in the temple pillar. At the later stage a similar temple with same name Ekambareswarar was constructed in Chennai by Pachiappa Mudaliar in order to avoid travelling time to Kanchipuram. The Archaeological Survey of India report of 1905–06 indicates widespread renovation activities carried out in the temple by Nattukottai Chettiar.

Daily poojas are conducted six times in this famous temple. Moreover the special poojas to be carried out in Lord Siva's Temple are also performed regularly.

Nearby Places to visit

The kanchi Kailasanathar temple is the oldest structure in Kanchipuram. Located in Tamil Nadu, India, it is a Hindu temple in the Dravidian architectural style. It is dedicated to the god Shiva, and is known for its historical importance. The temple was built from 685-705AD by a Rajasimha ruler of the Pallava Dynasty.The low-slung sandstone compound contains a large number of carvings, including many half-animal deities which were popular during the early Dravidian architectural period. The structure contains 58 small shrines which are dedicated to various forms of Shiva.

Varadharaja Perumal Temple or Hastagiri or Attiyuran is a Hindu temple dedicated to Lord Vishnu located in the holy city of Kanchipuram, Tamil Nadu, India. It is one of the Divya Desams, the 108 temples of Vishnu believed to have been visited by the 12 poet saints, or Alwars. It is located in a suburb of Kanchipuram known as the Vishnu Kanchi that is a home for many famous Vishnu temples. One of the greatest Hindu scholars of Vaishnava Visishtadvaita philosophy, Ramanuja is believed to have resided in this temple.

In Kamakshi Amman Temple, the main deity, Kamakshi, is seated in a majestic Padmasana, a yogic posture signifying peace and prosperity, instead of the traditional standing pose. The goddess holds a sugarcane bow and bunch of flowers in the lower two of her arms and has a pasha (lasso), an ankusha (goad) in her upper two arms. There is also a parrot perched near the flower bunch. There are no other Parvati temples in the city of Kanchipuram, apart from this temple, which is unusual in a traditional city that has hundreds of traditional temples. There are various legends that account for this fact. One of them according to Kamakshivilasa is that the Goddess had to absorb all the other shakthi forms to give a boon to Kama, the Hindu god of love.

It was a flourishing port town during the time of Pallavas.This is one of the main tourist place in kanchipuram. The monuments of Mamallapuram are excellent specimen of Dravidian temple architecture and Pallava art.

Chennai has the nearest international airport, is situated around 75 km away from Kanchipuram. Both public and private transport facilities are available at the airport.

Kanchipuram is also well connected with the other part of the states and it is few kms from the Quadrilateral National Highway. There are frequent bus services from Chennai and it takes 2-3 hours. The chennai Metropolitian and the state express transport operate the services.