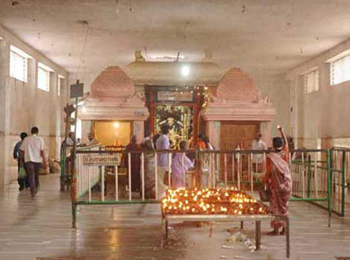 The Dakshinamurthy Swami Temple is located in Tiruvottriyur and is dedicated to God Dakshinamurthy. This is a unique temple of God Dakshinamurthy with the idol facing the north, the direction of the God of wealth, Kubera. The God holds Agni (fire) in the right hand and a serpent in the left. Another specialty of this temple is the presence of the 18 maharishis around the God. An elephant can be seen outside worshipping the God. There is Banalinga in the front hall of the temple.

This is a sacred place dedicated to Guru (Jupiter) facing north, the direction of Kubera the Lord of Wealth. It is believed that worshipping here benefits the devotee with all prosperity.

There was a Siddha living in this region running a school to teach Vedas to students. He made an idol of Lord Dakshinamurthy, the origin of Vedas. Traditionally, Lord Dakshinamurthy is seen facing south. Rarely, He is facing north, thus making this place more sacred as Vada Guru Sthalam (North Jupiter Land). The installation of the deity is on the basis of Jupiter facing north among the nine planets.

How to Reach Dakshinamurthy Swami Temple

Bus facilities are conveniently available from any corner of Chennai city. Also the devotee can reach Beach from Central by local train and get bus to reach the temple. It is 12 km from Beach.