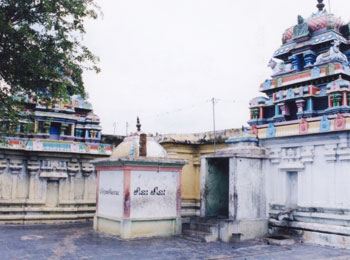 The temple for Soma (Moon), the 2nd of the navagraha is set in Thingaloor, Tamilnadu, India. It is dedicated to God Soma (Moon). “thingal” in tamil means “moon” thence the name Thingaloor. This is the second significant temple of navagraha. This is a Shiva sthalam and therefore the main idol within the temple is Kailasanathar or Lord Shiva who is accompanied by goddess Periyanakiamman. Like Guruvayoor, this temple is famous for Annaprasana (feeding rice to children) in Tamilnadu. Annaprasana is performed by people during the following stars days - Ashwini, Mrigasheersha, Uthiram, Swati, Tiruvonam, Sadayam and in the Chandra Hora time.

The temple of Lord Shiva, who presides as Lord Kailasanathar in Thingaloor, is about 1500 years old. Built in the seventh century by Pallava King Rajasimha, this ancient Shaivite shrine reflects the early Dravidian architecture. A huge Nandi is seen in the front, facing the temple. The Shodasa Linga (16-sided Shiva lingam) at the main shrine is formed out of black granite, which is a unique feature. The Thingaloor temple has a The 5-tier rajagopuram is surrounded by 2 prakarams. The place has been praised by the verses of The temple has shrines for God Shiva, who offers darshan in the form of Kailasanathar and deity Shakthi. The temple also has a separate shrine for the planet Moon, called as Thingal in Tamil. Chandran is mano karaka.

The moon is one of the main elements in star divination. It is known as mano karaka. It rules the heart and mind. It guides mental stability and focuses on activities. It is said that Chandran changes from a zodiac sign to the next sign once in 2 and 0.5 days and is the basis of calculation in Vedic astrology. Happiness, contentment and granting boons are the main responsibility of the moon. It also controls human body fluids and health.

According to the legend when the cosmic ocean was churned, God Vishnu, in the form of Mohini, a beautiful maiden was distributing the Amrutha (necter) amongst the devas. The whole idea was to ensure that the asuras didn't get the Amrutha. At the behest of Sukracharya, the asura guru, one of the asuras, known as Swarbanu disguised himself as a deva and tried consuming the nectar. Surya and Chandra noticed this and complained to God Vishnu, who inturn cut the head of the Asura with his Chakra. But by the time the Asura had consumed his portion of Amrutha and hence couldn't be killed. The Head joined with a snake's body and became Rahu. The body portion became joined with the snakes head and became kethu. Now Kethu and Rahu, wished to take revenge on Surya and Chandra. To escape the wrath of Rahu, it is at this temple that Chandra prayed to God Shiva and got his blessing and escaped from Rahu. Shiva also blessed Chandran by adorning him on his forehead. Another legend goes like this, there was once a person named Apputhi Adigal who was born in Thingalur, he was a vigorous devotee of Thirunavukkarasar, while never got a chance to meet the goodly soul in person. He did a great deal of welfare action in the place where he grew up in the name Thirunavukkarasar. Amid his visit to this holy town Thirunavukkarasar caught wind of Apputhi Adigal and visited his dwelling place agreed to share in the supper offered in his honor. Apputhi Adigal sent his child to the backyard garden enclosure to bring a plantain leaf in order to serve food for Thirunavukkarasar,. While in the process of getting the plantain leaf from the backyard, a snake bit him and the child passed away. Not wishing to disillusion his visitant, Apputhi Adigal secured the body of his kid and tried to serve the saint Thirunavukkarasar. Thirunavukkarasar insisted that the kid, ho was a namesake of himself, to join him for the lunch. Upon insisting on the same multiple times, Apputhi Adigal had to convey that the kid had died because of snake bite. Thirunavukkarasar immediately too the body of the child to the sanctuary of Lord Siva in Thingalur and revived the child singing and appealing the Lord with a Thirupadigam, which starts like this "Nadar mudi mel irrukum nalla pamba...".

The festivals that are celebrated in this temple are Mahashivarathri in the tamil month of Masi (February-March), Margazhi Tiruvadhirai (December-January), Panguni Uthiram in March-April, Tirutarthikai in November-December.

The colour that Lord Chandran’s represents is white. He is offered with raw rice mixed with jaggery, white Arali (a flower), and white clothing. It is believed that this pooja removes obstacles in life. The gem stone Moon represents is Pearl and the directione he represents is North West.

The rays of the rising moon fall on Lord Shiva ( Kailasanathar in the tamil month of Panguni (March - April) on the Full Moon day ( Paurnami ) , The day before and on the succeeding day ( 3 day ) ). Poojas Performed on Full moon days every Mondays are very special in this temple.

Doshams related to psychological issues, mother, skin and nervous problems, jaundice, fluid accumulation are the diseases caused because of Chandra. By praying to Lord Chandran and doing the necessary pariharas, the above afflictions can be overcome.

The nearest airport to Thingalur Kailasanathar Temple is Thanjavur airport, which is 10 Km away from the temple.

Thingalur is well connected with road and plenty of buses are available to reach the temple. Thingalur is around 18 km from Kumbakonam of Thiruvayaru, Kumbakonam road.