The Baijnath temple dedicated to Lord Shiva (Baijnath) and out of the twelve Jyothirlingas, this is one of the temples that attracts a large number of tourists and pilgrims from all over India and abroad throughout the year. Baijnath Temple, is located at a distance of 16 km from Palampur is a significant site here. The temple was built in 1204 A.D by Ahuka and Manyuka, merchants in the region. Since establishment, the temple dedicated to Lord Shiva is continuously in construction. 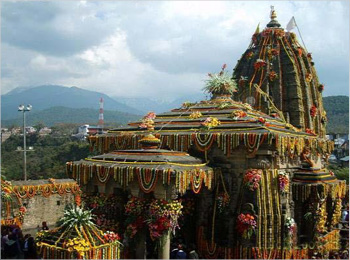 The temple was constructed in Saka in 1126, by Manyuka and Ahuka, two brothers, out of their devotion to Lord Vaidyanatha. The inscriptions in the temple suggest that a Sivalinga called Vaidyanatha existed on the spot, but it did not have a proper house. The present temple and a porch in its front were constructed accordingly. A British Archaeologist, Alexander Cunningham, noticed an inscription of 1786 in the temple that refers to its renovation by King Sansara Chandra. An inscription on the wooden doors of the sanctum of the temple says that the date is Samvat 1840 (AD 1783). An earthquake shook Kangra on April 4, 1905 and caused damage to the shrine. Currently, the temple is protected under the Archaeological Survey of India but worship and rituals are under a local board at Baijnath. The hereditary priests get a share. 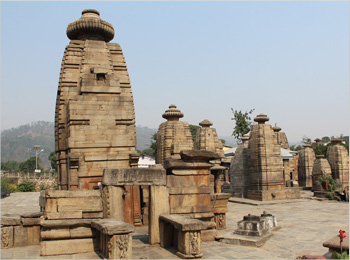 The sanctum of the temple has a Svayambhu Shivalinga within. A tall curvy-linear Shikhara is found atop the sanctum. There is also a vestibule entrance that leads to a large Mandapa. It has two large balconies. Idols of many Gods and Goddesses are carved on the outer walls of the shrine. The outer doorway is beautifully decorated with images of deities and religious inscriptions. There is also a small porch that rests on four pillars in front of the Mandapa. An idol of Nandi is seen preceding the pillars. It is established within a small pillared shrine. 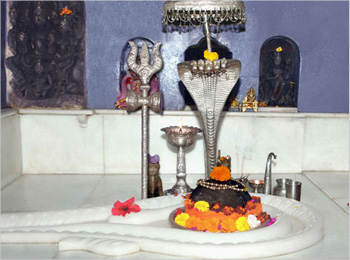 According to the legend, it is believed that during the Treta Yug, Ravana, to be invincible, worshiped Shiva in the Kailash. In the same way, to please the Almighty he offered 10 heads in the havan kund. Lord Shiva was moved, and restored his heads and bestowed him powers of invincibility and immortality. On attaining this incomparable boon, Ravana asked Shiva to go with him to Lanka. Shiva consented to the request of Ravana and converted himself into a Shivling. Shiva asked him to carry the Shivling and warned him that he should not put it down on the way. Ravana began going south towards Lanka and reached Baijnath where he felt the need to answer the nature’s call. Seeing a shepherd, Ravana handed over the Shivling to him and went away to get relieved. Finding the Shivling heavy, the shepherd put it down. The Shivling got established there and the same is in the form of Ardhnarishwar (God in form of Half Male and Half Female).

In this festival a gritmandal (column of butter) is placed on the Shiv Ling for 8 days. The butter for the gritmandal is prepared by washing desi ghee with water. On removal of gritmandal, the butter which is believed to have medicinal importance is distributed among the devotees.

A five days state level festival is celebrated on the occasion of Shivratri with traditional gaiety and fervor. The towns of Baijnath and Paprola are illuminated and the Shiv Temple is decorated with flowers and colourful lights. Cultural Functions are held in the Indira Gandhi Stadium for five days and a mela goes for several days near Shiv Temple. Havan is performed in the temple for the welfare of universe.

On the occasion of Panch Bhikham Chaturathi (October-November) walnuts are showered on the temple by the devotees.

Thousands of devotees throng the temple especially on Mondays during the Sawan Month (July-August) to pay obeisance to Shiva by offering jal on the Shivling.

This temple is famous for its water, has medicinal value. It cures several disease.

The nearest Airport is at Gaggal, 50 Kms from Baijnath and 8 Kms from Kangra Town.

Baijnath lies on the Pathankot-Chakki-Manali National Highway No. 20, half way between Kangra and Mandi.