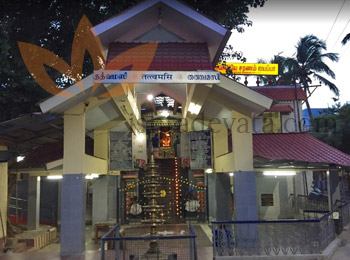 Ayyapan Temple is located in Ayyappan Koil Street at Madipakkam, Chennai. The temple enshrines Lord Ayyappa as the presiding deity. 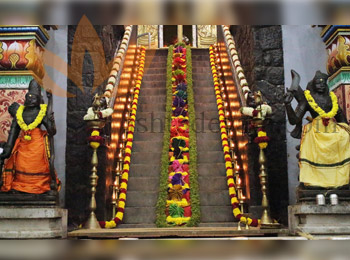 This temple is constructed with 18 holy steps like Sabarimala Temple of Kerala. The temple has shrines for Ganapathy, Mahishasuramardhini (maligaipuruthamma), Nagaraja, Muruga, Navagrahas and an Anjaneyar (in the pillar). Thanthriha method of pooja by experienced Namboothiri’s from Kerala is followed in this temple.

Devotees gather in large numbers during the festive season. For those who are unable to visit the Sabarimala Ayappan temple, the Madipakkam Ayappan temple is an alternative where devotees can bring ghee for abhishekam in an Irumudi kettu and climb the holy 18 steps. Only those who are taking 41 days viradham and have irumudi kettu will be allowed to climb through Holy 18 steps. The sanctity of the 18 steps is strictly maintained here — only male devotees and female with in the age group of less than 10 years old and more than 50 years old, will be allowed to go to Ayyappan sannidhanam through side staircase to have dharsan. Lot of devotees perform pooja and make irumudi kettu here and proceed to sabarimala every year during the makara- mandala period.

The main feature of Madipakkam Ayyappan Temple is the Parayeduppu held during the annual utsavam in November. During this utsavam, the deity is taken in procession and grains submitted by devotees in front of their homes are taken for temple use and also Devotees visits the temple during the festivities that start in December. Special poojas are also performed throughout the year.

The temple was founded by Sri Ayyappan Mandali, a registered cooperative society. A Trust has been created by this mandali named Sri Ayyappan Temple Trust and the temple’s day to day affairs are jointly taken care by these two organization. The kumbhabhishekam was conducted in 1978. This Ayyappan temple was constructed on a half-ground plot donated by a devotee Sri Adhikesava pillai. The Mandali later acquired the adjacent plots of land and today, the temple extends across more than seven grounds with staff quarters, kitchen, canteen, and four mandapams.