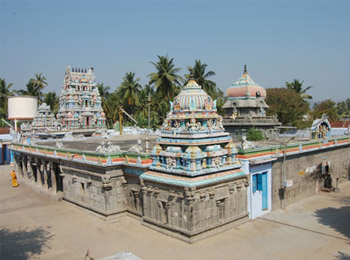 The Athitheeshwar Temple is devoted to Lord Shiva and is situated in Vaniyambadi, Vellore, Tamil Nadu, India.

The presiding deity of the temple, Lord Dakshinamurthy is seen seated on the bull vahan of Lord Shiva. He holds a deer and axe in his hand. He is seated, with his hands in the Chinmudra, the second finger and the thumb are bent to touch each other while the other three fingers stand erect together. Here the fore finger represents the Jeevatma and the thumb represents the Paramathma. It explains stating the jeevatma bends to join the paramatma, leaving the other three fingers that represent the fate, illusion and arrogance. It is believed that these 3 drag the Jeevatma from the paramatma.

How To Reach Athitheeshwar Temple

Vaniambadi is 67 km from Vellore on the Krishnagiri road. Old Vaniambadi is 2 km from the bus stand where the temple is situated.