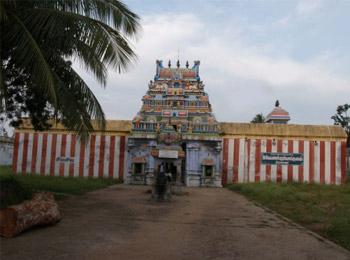 The devotees should submit their grievances to the Goddess on Fridays and Tuesdays between 6.00 a.m. to 7.30 p.m.and perform Archanas. You can tell her your problems, standing by the side of Sri Chakra Yanthra and one can feel the response from the Mother. The priest, who is performing the puja in the God’s section, will come to the devotee here to say that the aspiration of the devotee would be fulfilled within a certain time and many have experienced the effect, it is said. The Vedas are in the form of Vilwa leaves. According to belief, the Vedas surrendered to the God to protect them from destruction when the world comes to end “ Oozhi Kalam. They have taken the form Vilva trees as advised by the God. Hence the name Vilvaranyam to the place and Vilvavaneswarar to the God. The God is swayambu here, not sculpted. A temple that began the Sivarathri festival and followed then in all Shiva Temples then. Nandhi faces the opposite direction here. No place for the Navagrahas. The Dwarabalakas (watch and ward) are but Vishnu and Brahma themselves.

This is the temple where Saptha Madhas (seven maidens) worshipped. God Muruga has six faces here. The Vel, peacock, the hand lines (rekhas) nails are very clear in the idol made of a single stone. The peacock is turning on the left side. Built by the Chozha king, the temple is praised by the Thevaram saints and Arunagirinathar. The temple is 2000 years old. Siva and Parvathi stays here with all affinity. Thiruvaikavur is a place where there will be no fear of God Yama the God of Death. 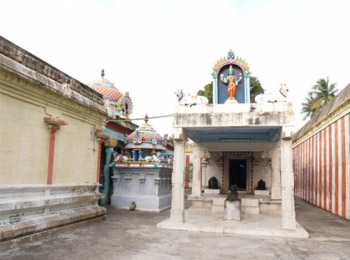 In this temple in Thanjavur the main deity is Vilvavaneswarar who is a swayambu along with the Goddess Valaikainayaki. The Vinayakar here is Sundaramurthiar. The Vilwa tree is considered holy and water from the Ema Theertham sacred. The temple and its deity have been sung about in the Thevaram.

One day when sage Thavamuni was in penance he saw a hunter chase a deer. The sage protected the deer making the hunter turn on him in anger. God Shiva who was watching all of this came there in the form of a tiger and chased the hunter up a tree. The hunter was picking on Vilwa leaves to stay awake on that Maha Sivarathri night. One of those leaves fell on the tiger and unknowingly did a Shiva puja on Sivarathri. Shiva appeared in front of the hunter and gave him salvation. Yama, the God of Death came there to take the life of the hunter. As Nandhi was indifferent to Yama, it angered Shiva. Nandhi then bound Yama with her breath. Yama then built a tank opposite the temple, did puja and then left. Goddess grants. She is all blessingful called Valaikainayaki protectors of all beings.

Maasi month – Maha Sivarathiri – two days festival – Theerthavaari on the New Moon Day. Panchmukha Moorthis Procession in the Palm leaf cart in the night. It is a significant feature that the Rishabam, Swami and Ambal are all made in Palm leaves and they are taken in procession. Arudhra Procession - This festival is quite noteworthy in this place on the Tiruvaathirai, Vijayadasami and Tirukkaarthigai days.

The Lord of this place graces us as a swayambu moorthi. This place brought in the important Maha Sivarathiri festival, the festival of Siva temples. In this sacred temple, Lord Dakshinamurthi appears in the standing posture with a staff in his hand. Such an icon cannot be seen in any other place. Nandikeswarar is reversed and in the opposite side. There is no Navagraha sanctum in this temple. In the ardha mantapam, on both the sides of the door step, Lord Vishnu and Brahma stand as security guards, a feature that could not be seen anywhere.

As the Trimurthys are here, the temple has special significance. As the couples sit face to face during their wedding, the God and Goddess are facing each other in this temple. The other significance is that Dakshnamurthy here is in a standing position with a cane in hand. Bathing or spilling the water of the tank theertha here assures relief from illnesses. They are also relieved from bad spirits.

Thiruvaiakavur is 17 Kms from Kumbakonam, 45 from Thanjavur and 7 from Swamimalai.Thiruvaikavur is on the Kumbakonam-Thiruvaiyyaru bus route near Andakudi has bus facilities from Kumbkonam. For those coming from other places, car journey would be convenient. Nearest Railway station is Kumbakonam, the airport Trichy.