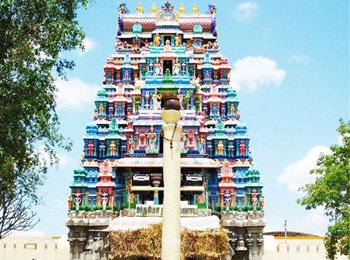 The Soundarraja Perumal Temple in Thadikombu, a beautiful village 10 km south of Dindigul, is considered to be as sacred as the Kallazhagar Temple near Madurai. Arulmighu Soundarraja Perumal is found in the sleeping posture in this temple and it is said this place was previously known as Thaalamaapuri. Though it is a Vaishnava temple, the sthala vriksha is the vilva tree.

This temple is supposed to be as important as the Azhagar temple near Madurai and history states that it was built 500 years ago by Achutha Devarayar of the Vijayanagar Empire. The sculptures in this temple speak of the artistic skill of the builders and it is surprising to see even minute details like the nail tip, muscles, nerves and eyelashes sculpted with such finesse. There is a separate shrine for Lord Dhanvanthari. On new moon days, abishek is performed with oil and herbal paste known as Lehiyam. Chakarathalwar graces with deities attributed to Gayatri Mantra. Lord Narasimha graces with Ashtalakshmis. There are also shrines for Vishwaksenar, Twin Vinayaka, 10 incarnation forms of Lord Vishnu, Lakshmi Narasimha, Venugopala, Anjaneya and Swarna Bhairava.

The temple may well be called a treasure house of Indian sculptures of rare workmanship. They speak volumes. Mother Soundaravalli graces from a separate shrine. Lord Vinayaka and Vishnu Durga and deities of prosperity – Sanganidhi and Padmanidhi graces at Her shrine. Mother’s shrine may well be called a museum of sculptures. The sculptures include Lord Vishnu measuring the three worlds, Lord Narasimha, Vaikundanathar, Venugopala, Lord Vishnu on Gaurda, Anjaneya carrying Lord Rama on his shoulders, Chakarathalwar, Oordhvathandavar (cosmic dance of Lord Shiva), Oordhvakali, Akora Veerabadra, Rathi and Karthaveeryarjuna.

Lord Soundararaja Perumal graces from sanctum sanctorum with his consorts Sridevi and Bhudevi in a standing form. As it is believed that Lord Kallazhagar has connections with this place also, a festival of the Lord visiting is celebrated at Madurai in Vaigai River. The festival represents the grace of the Lord to Sage Mandukya. On each Tiruvonam star day, a dheep is lit at the feet of the Lord. The procession deity would be following the lamp taken before Him. It is believed that those fortunate to have this darshan would be relieved of their sins. 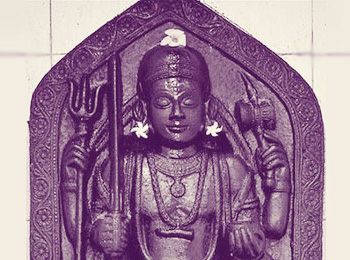 The Sanskrit word Mandookam means frog. A sage was once cursed and became a frog and is known as Sage Mandookya. He performed severe penance on Lord Vishnu in this place for relief from the curse. During the course of his penance, a demon was harassing him. Responding to prayer call of the sage, Lord Vishnu-Madurai Kallazhagar destroyed the demon and protected the Rishi. As entreated by the sage, Lord stayed here itself in the name of Soundararajar.

5 day festival in the month of Chithirai (April-May) and 10 day Adi Poornima-July-August are the festivals celebrated in the temple, drawing huge crowd of devotees. During Chitra Month, Lord Alagar will have 12 days of special Pooja. Full moon day of the month Lord Alagar will be on the processing of Ethir servai.

Special pujas, aradhanas and opening of Sorga Vasal marked the 'Vaikunda Ekadasi' festival, which was celebrated with religious fervour at Perumal temples.

Those who have lost their possessions and those desirous of restoring broken relationships offer lime fruit garlands to Karthaveeriarjuna lighting ghee lamps. Sri Andal graces on every Thursday in the Mandap here, when devotees perform turmeric abishek for early wedlocks. The Swarna Aakarsha Bairavar here is believed to solve people’s economic problems. People believe that they get even foreign suitors if so prayed for. Devotees also throng the temple for child boon, academic achievements, business development etc.

The nearest airport is Madurai Airport. The nearest railway station is Dindigul Railway Station. It is also connected by road.