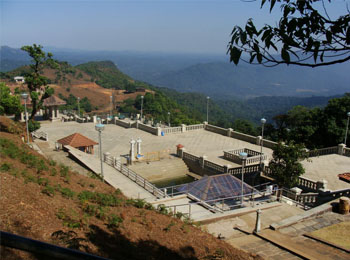 The deity of God Shiva is worshipped at the ancient Agastheeswara Temple which is located at Talakaveri in Kodagu, Karnataka. The Talakaveri is located on the Brahmagiri hill and is almost 44kms away from Madikeri. It is among the other temples located in the area where thousands of devotees visit every year. The God is known as God Agastheeswara in the temple. 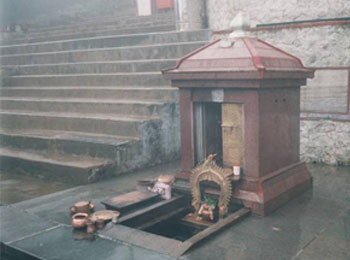 God Agatheeswara is worshipped in this temple and it denotes a connection between Sage Agasthya and Kavery. It is a small temple but a large number of pilgrims visit it during the year. The temple comprises of two shrines, one contains a Shivalinga while the other one contains a deity of God Ganesha. As per a legend, God Brahma, God Mahesh and God Vishnu appeared in front of Sage Agasthya at holy Ashwantha tree situated inside the temple. The tank of holy Kudike originates a spring from Kaveri River and it is considered holy to bathe in it.

Thousands of pilgrims and devotees visit this temple on the Tulasankramma day which falls in mid-October. The devotees gather around the river to watch the fountain as the water rises and gushes from the spring. The festival of Tula Snanam is celebrated and observed in the month of Tula. Pilgrims visit Kaveri’s banks to celebrate as it is believed that Goddess Parvathi appears as Theerthobhava in the Kundike.

As per the Hindu mythology, the earth was unbalanced during God Shiva and Goddess Parvathi’s marriage. God Shiva then sent Sage Agasthya to Vindhya Mountains in the south to bring about the balance in the world. The Sage was reluctant to go as he wanted to attend the holy wedding as well. So he told God Shiva that without performing the sankalpas and tirtha, he won’t be able to leave Mount Kailash. God Shiva then collected the Cauvery in the Kamandal and sent Sage Agasthya in the South. During this, God Indra was hiding in the strand of a fiber in a Lous stalk as he was cursed and in order to perform redemption, he required a holy tirtha. As per the advice of Sage Narada, God Indra prayed to God Ganesha to bring the river nearby. The nearest river was the Cauvery in the Kamandal of Sage Agasthya. God Ganesha then transformed himself into a crow and came near Sage Agasthya while he was meditating. The Sage upon seeing the crow, tried to shoo him away but the crow then tipped the kamandal over. The crow instantly disappears and a small boy appeared at its place. The Sage got annoyed as he thought that the boy was playing tricks. He went forward to hit the boy but the boy ran away. The sage tried to chase him but then the boy transformed himself in God Ganesha.

The Sage was astonished as he saw God Ganesha in front of him and he knocked his head with clenched fists upon realising what he was about to do. Since then, Pillaiyaar Kuttu became an integral part of Vigna Vinayaka worship. This temple contains a Shivalinga which was installed by Sage Agasthya and dedicated it to God Shiva as he formed the connection between river Cauvery and Sage Agasthya.

The devotees can visit the temple between the months of September and May. It is recommended to avoid the monsoon season.

As per the legend, a dip in the holy river near the temple can heal various types of psychological and physical miseries. The river is considered sacred by the devotees due to its miraculous powers and the local people pray Goddess Cauveramma Devi Thayi there as well

How to Reach Talakaveri

The devotees can reach the Mysore railway station which is about 160kms away from the temple.

Frequent bus transport of State Road Transport Corporation is available from Mysore till Talacauvery. The region is also connected by buses operating between Kerala and Karnataka. The devotees can also hire a taxi to reach the temple or opt for private buses.