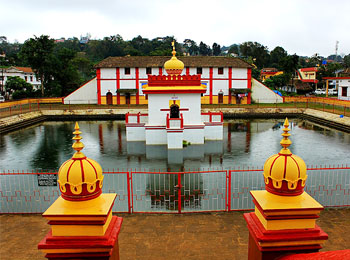 The deity of God Shiva is worshipped at the ancient Omkareshwara Temple which is located at Madikeri in Kodagu, Karnataka. The temple’s architecture depicts Islamic and Gothic designs which draw a large population of tourists and devotees. The temple is one of the famous religious destinations of Coorg. 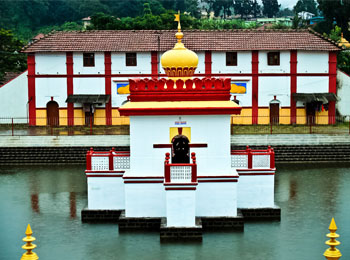 The holy temple of Omkareshwara was built in the 18th century by King Lingarajendra II. The temple reflects a unique architectural form which is similar to the styles seen in Muslim dargah. The temple comprises of a huge dome in the centre that is supported by four minarets.

A tank of fresh water is constructed in front of the temple along with a small mandapa that is built in the middle of the water. The domes and turrets of the holy temple are reflected in the water. The deities of God Shiva and God Parvathi are enshrined in front of the tank while the Shivalinga is placed at the entrance. A copper plate with the history of the temple engraved on it is fixed at the entrance as well.

The temple is constructed in such a way that the central hall leads to the doorway of Garbhagriha. There is a passage along the Garbhagriha built for the devotees to perform the ritual of three parikramas that signifies that the devotees are encircling the universe. The window bars of the temple are engraved with the word ‘lim’ and are created of Panchaloha.

As per the legend, this temple was constructed by King Lingarajendra II to a form of redemption after a Brahmin was killed by the King in order to fulfil his ambition. After the deed, the King began having nightmares and sought out a few wise men for advice. The wise men told the king to build a temple of God Shiva to ensure the mental peace. That is when the king built this temple and enshrined a Shivalingam in the temple. The King soon stopped having nightmares and the Shivalingam since then is worshipped as Omkareshwara.

The months from October to March are best to visit the temple.

The devotees believe that the temple helps get rid of the tormenting psychological fears as well as insecurities.

How to Reach Madikeri

The airport of Mysore is nearest to the temple. The airport is well connected and flights are available from Mumbai, Kolkata, Chennai, Delhi, Hubli and Dubai. The devotees can also reach Mangalore International Airport to reach Madikeri.

The nearest railway station is located at Hassan, Kannur and Kasaragod. The devotees can also reach Mangalore or Mysore which are about 140kms away from Madikeri.

Frequent road transport is available till the temple as Madikeri is situated on Karnataka State Highway 88 which connects Mangalore to Mysore. The devotees can either take KSRTC buses that connect Madikeri to Mysore, Virajpet, Bangalore and other places or hire a cab to reach the temple.