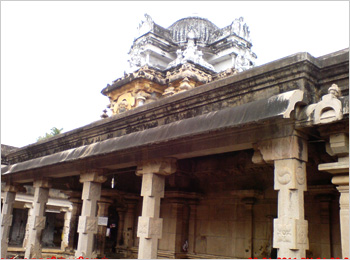 The Yoganandeswarar Temple at Thiruvisanallur is very ancient. The presiding deity of this temple, is Yoganandeswarar, and is also known as Sivayoginathar. Eight Shiva yogis, after severe penance on Lord Shiva, merged with the Lingam. This resulted in the name Sivayoginathar.  The place where the temple is located was first a vilva forest, Hence he is known as Vilvaranyeswarar. He is also known as Puradhaneswarar. His consort in the temple is known as Soundaryanayaki or Shantha Nayaki. The sthala vriksham is Arasa maram and the Theertham Jatayu Theertham. Chatur Kala Bhairavar is famous here. The four Bhairavars with Saneeswara Bhagawan and Sivalingam on their sides denote different periods of life and praying here will solve our problems for the entire lifespan. The four Bhairavars, (Chatur Kala Bhairavars) each representing the four phases or four Ashramas in the lifespan of a human being. 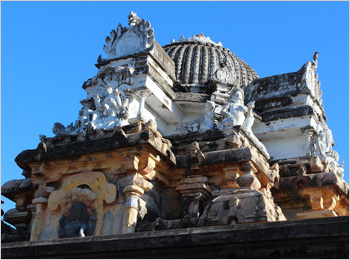 On entering there is a large stone pillared hall at a lower level, and from the door step one can sight a small tower over the garbhagriha. In the enclosure around it are found sannadhis for deities such as Ganapathy, Muruga, Gajalakshmi, Durga and Chandi. While Dakshinamurthy is on the southern side of smaller enclosure, the idols of the Saivaite quartet are on the left side of the entrance in a larger enclosure.

Sri Ramalinga Swamigal (Vallalar) of Vadalur has also sung in praise of this temple. The fact that Gnanasambandar had visited it ascribes its existence to the seventh century. It is ranked 42 among the 63 shrines lying north of the River Cauvery. It falls under the jurisdiction of the Executive officer of Koranattu Karuppur Sundareswarar temple.The temple with its massive enclosure and a five-tier rajagopuram stuns the visitor. The rajagopuram and the minor shrines inside it were indeed built by Rajendra Chola (1012-1044 A.D.) Sivayoginathar shrine has been singled out for those born in the Rishaba rasi. Sri Ramalinga Swamigal (Vallalar) of Vadalur has sung in praise of Karkadeswarar temple. Karkadeswarar temple is to be sought for by those born in Kadaka rasi with ruling stars Punarpoosam, Poosam and Ayilyam. 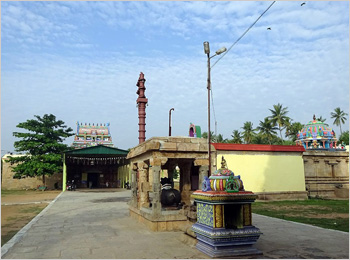 The uniqueness of the temple lies in the fact that there are chatur Kala bhairavas, instead of one, in the first enclosure, facing west. To their left side are Siva linga and Saneeswara idol accentuating the different stages in a man’s life, namely, brahmacharya, grahastasrama, vanaprasta and sanyasa. The Bhairavas’ delineating the four kalapramanas are Gnana Bhairava, Swarna akarshna Bhairava, Unmatha Bhairava and yoga Bhairava respectively 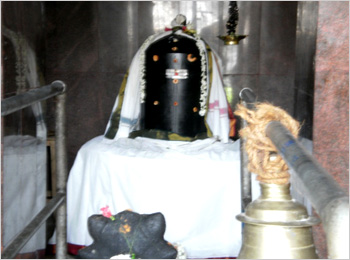 The Brahmacharya phase of the human life is dominated by his quest for knowledge. Gnana Bhairavar bestows good education and good employment to his devotees.

In the Grahasta phase, Swarna akarshana Bhairavar blesses his devotees with excellent growth in career and material gains.

In the Vanaprastha phase, His devotees are blessed with good health, financial stability and good luck.

In the Sanyasa stage of life, a man is supposed to be totally devoted to God. By praying to Yoga Bhairavar and the Kailash Lingam beside the Yoga Bhairavar, man attains salvation. The objective of existence is to try to merge the jivatma (individual self) with the paramatma (God). This is known as mokshamor liberation from the cycle of birth and death. The four ashrams prepare a person to undertake the process in a controlled and directed manner.

Devotees who worship Chatur Kala Bhairavar during the 8th day of the waxing period (ashtami of Sukla paksham or valarpirai) gain prosperity, advancement in business and career. Devotees worship, during the 8thday of the waning period (ashtami of Krishna paksham or theipirai) to get cured of their diseases, to lead a peaceful family life, protection from evil spirits and envy. Lighting oil lamps with black pepper on eight consecutive Sundays during Rahu kalam 4.30PM to 6.00 PM at Bhairavar’s sannidhi results in getting back lost property and wealth.

A king belonging to present day Kerala had illicit relation with lot of women. He also tortured and cheated many of them. At one stage, the king wanted to restore to a decent life and found a yogi who advised him to visit Thiruvisanallur. The king reached the place, had a dip in river Cauvery and worshipped Sivayoginathar to get rid of his curse. The legend leads to the belief that whoever incurs curse of women, get curative visiting the temple.

According to another legend, Nandi (the sacred bull of Shiva) got rid of Yama (Hindu god of death), who was approaching a worshipper of Shiva. This legend leads to the belief that a visit to the place is a curative to death related fears.

Legend has it that a yaksha who mimicked the gait of Sage Durvasa, noted for his irascibility, was cursed to be born as a crab in the above ‘theertham’ and worship Siva with lotus flower for the curse to be lifted. At the same time, Indra was said to be offering ‘puja’ daily to the Lord with 108 lotus flowers plucked and supplied by Varuna. As days wore out, Indra noticed one flower missing in his count and thereupon he traced the missing flower to the claws of a golden crab. Instead of killing it, he traced its path which led to the lingam. Before Indra caught it, it made a hole into the lingam and vanished. It is averred that after performing special ablution to the Siva lingam, the golden crab could be seen. However in the sanctum sanctorum, just above the lingam and to its side the configuration of the crab and its pathway are well etched on stone. The story of Durvasa is engraved on one of the pillars in the anterior hall.

Thiruvisanallur can be traced to the time of the Medieval Cholas having 97 inscriptions dating back to Parantaka I,Rajaraja Chola I and Rajendra Chola II. Two temples, Sivayoginathar and Karkadeswarar, near Kumbakonam, are believed to be storehouses of information. As if refurbishing the spiritual trail blazed by Sridhara Venkatesa Ayyaval, Sadasiva Brahmendra and Sadguruswamy, who spread the bhakti cult of Nama Siddhanta and bhajana paddathi throughout the Thanjavur delta during the rule of Sahaji II (1684-1712 A.D) and his successors, are the shrines of Sivayoginathar and Karkadeswarar, which bear the legacy of having been sung by Thirugnanasambandar alone. Both these temples are a must to visit especially when one takes part in the annual Ayyaval utsavam in the Tamil month of Karthigai or at any time of the year.Thiruvisanullur, now part of Thiruvidaimarudur block, lies at a distance of eight kilometers to the east of Kumbakonam on the northern side of the River Cauvery. It went by the name of Sahajirajapuram after Sahaji II who donated it to 45 pandits.

The Sunlight Pooja on Chithirai 1, 2, and 3 is a significant one. On the last day of the Aipassi month, the Panca moorthis go on procession – Theerthavaari at Kaveri. Aarudra Darshan on the Maha Sivarathiri Day. Other celebrations are on Pratosham, Thirukkaarthigai and on the Karthigai Somavaaram (Mondays).

Prayers offered at the temple

Nandi safeguards as Rishaba Vaahanam.  So, this is the place that alleviates the doshaas of the people belonging to Rishaba zodiac sign (Kritigai, Rohini and Mrasir-sham).  Worshipping this deity on Pratosham, Sivarathiri and Somavaara days is very good.

The deity in this temple is a Swayambu Lingam facing east. On Chithirai 1, 2, and 3, the Sunrays fall on the Lingam.

Near the southern temple wall is seen the Sun-Dial fixed some 700 years ago. This clock is constructed in such a way to measure the route of the sun from the sunrise in the morning till the sunset in the evening. A semi-circle is made and the numbers from morning 6.00 to evening 6.00 are carved around. In the center, a brass nail is fixed. When the sunlight falls on this nail and on the number where its shadow falls, is the time at that moment. This is an excellent instance to show that the Tamils were experts in the Astronomical Science.

Once, a man who was a habitual sinner was about to be taken away by Yama. This man had indulged only in evil deeds and had not done anything good to anyone all his life. This man came running into the temple to escape from Yama and was shouting and pleading to Lord Shiva to save him. Nandi trained his ears towards the entrance of the temple to hear the cry of the man and informed Lord Shiva about the same. Though, this man was a habitual sinner, Lord Shiva blessed him with papa vimochanam(absolution of sin) and Mukthi because he had come to Shiva with total devotion. It is to be noted that the idol of Nandi with its head turning to a side. It is believed that those who pray to Him here during the Pradosham(Twilight period in the evening on the 13th day of every Lunar fortnight) will be absolved of all their past sins.

There is also a sannadhi for Lakshmi and Narayanan which is rare. Vishnu and Lakshmi are supposed to have got the blessing of Shiva here for their marriage. Worshipping Lakshmi Narayanan on shravan nakshatra, ekadasi and Saturdays is considered special. Devotees who light 6 oil lamps and offer Tulasi garland to this deity for six consecutive weeks are blessed with progeny, peaceful family life, removal of obstacles in marriage and general prosperity.

There is a Sun Dial in the peripheral wall of this temple opposite to Ambal’s Sannidhi, which is a symbol of the scientific advancement during the Chola period. This is the temple for Rishabha Rasi. People born under Rishabha rasi are recommended to visit and pray at this temple regularly.

Sridhara Ayyaval’s ashram is situated in this village. There are few miracles about his life. Devas and Pithrus are believed to have partaken in a meal when he conducted Shraddham for his father, although the local Brahmins refused to attend.Once on a New Moon day, he brought Ganges to the well in his house for purification. He is also credited with restoring life to a young man, out of compassion for his parents.Sridhara Ayyaval is reported to have vanished after entering the Sanctum Sanctorum of Madhyarjuna Siva temple at Thiruvidaimaruthur.