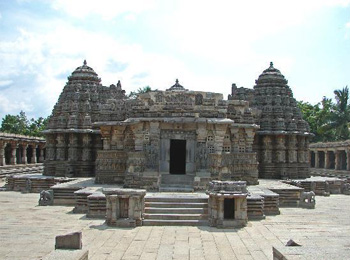 The shrine of Torana Ganapati located near the entrance of the Sri Math premises is a special one. As the name suggests, this temple is dedicated to Lord Ganesha who is worshipped here in the forms of Kshipra Varaprasadi and Vara Prasadi. The padukaas of Vriddha Narasimha Bharati Swamy are the prominent attractions of this temple.

About 400 years ago, the Sringeri temple was under threat from pretty rulers as they want to establish themself. The responsibility of saving the temple fell on the Jagadguru Sri Narisimha Bharati. He was meditating and heard a voice within which directed to pray the God nearest to him. The Jagadguru searched and found a form of Lord Ganesha on the threshold above his head, literally the Torana of the door. He completed a ritual of consecration in which the consciousness or power of the Lord Ganesha is brought into the Torana door, to awake the icon in Sringeri temple. Since then it became custom for devotees and pilgrims visiting Sringeri, to first have darshana of Sri Torana Ganapati and only then proceed to have the darshana of Sri Sharadamba and the various deities and the Jagadguru.

Coconuts and modaks of sugar and jaggery are the offerings made to the deity.

Special prayers and rituals are performed on Tuesdays and on the day of Chaturthi.

Lord Ganesha fulfils the wishes of the devotees.