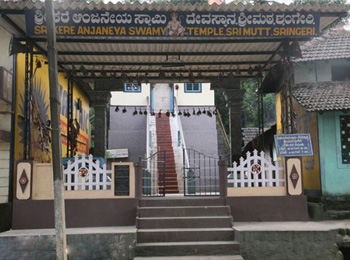 The temple is small, beautiful and well maintained. The temple offers spiritual atmosphere for meditation. One has to claim twenty seven steps to have darshan of the Lord. Sri Anjaneya of this kshetra is facing south and seen as walking towards east. Lord is holding a lotus flower in His left hand and with raised right hand gives blessings to all the devotees. He is wearing nupuram in his leg and keyuram in the hand. His glowing eyes showers glorious and gracious blessings to the bakthas mesmerising them.

The main festival celebrated in the temple is Deepotsavam that is organised on the Saturday of Kartika Krishnapaksha month.