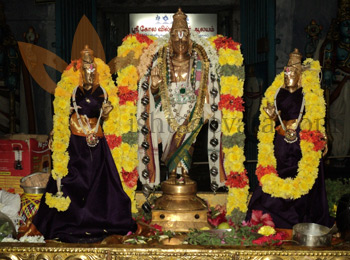 Desams allude to the 108 Vishnu sanctuaries that are specified in progress of the Tamil Azhvars (holy people). Divya in the Tamil dialect designates ""premium"" and Desam specifies ""place"" (temple). Of the 108 sanctuaries, 105 are situated in India, one in Nepal and two outside of the Earthly domains. The greater part of the Divya Desams in Tamil Nadu take after the Thenkalai convention. This incorporates the essential sanctuaries of Srirangam and Triplicane. The Divya Desams are venerated by the 12 Azhvars in the Divya Prabandha, a gathering of 4,000 Tamil verses. Master Shiva, the other real god in Hinduism, is comparatively connected with the Paadal Petra Sthalams, 275 Shiva sanctuaries which are commended in the Tevaram standard by the 63 Nayanmars.Sri Kola Valvilli Ramar Perumal Temple Temple is dedicated to Lord Vishnu and is located 19 km away from Kumbakonam, Tamil Nadu,India on the Kumbakonam-Chennai highway.

In Tamil Nadu, this temple is dedicated to the Hindu god Vishnu. It is one of the 108 Divyadesam dedicated to Vishnu, who is worshipped as Kola Valvill Ramar and his consort Lakshmi as Maragathavalli. Located about 25 kilometres North East of Kumbakonam off the Madras road is the Kola Villi Raama Divya Desam in Thiru Velliyankudi. A small 10 feet road leads one along the 6 km path from Sholapuram to ThiruVelliyankudi with complete greenery and swirling breeze welcoming one all the way to the Divya Desam. The temple practises Vaigasana Agama and Vadagalai. Vishnupathi Punniya Kalam, an auspicious time during the first days of Tamil months of Vaikasi, Avani, Karthigai and Masi is celebrated in the temple seeking divine auspices from Garuda. Moolavar is Kolavilli Ramar and Sheerapthi Nathan. The Urchavar is Shrungara Sundarar (fond of dressing attractively). The Amman / Thayar us Maragathavalli (Sri Devi, Bhoodevi). The Thala Virutcham is the red plantain. The Theertham is Shukra, Parasurama, Brahmma and Indra theerthams. The Agamam or Pooja is Vaikanasa Agama. The temple is about a thousand or two thousand years old. Its historical name is Bhargava Kshetra. The Temple Tank is Sukra, Brahma, Indra and Parasara. The Poets are Thirumangai Alwar - 10 pasurams , who appeared for Kidantha Thirukkolam, Bhujanga Sayanam, East. The Architectural styles is Dravidian. 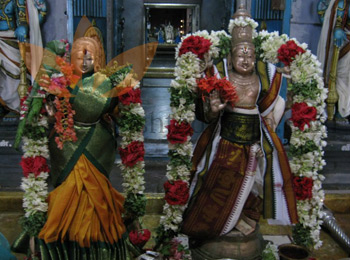 The temple has a 3-tier gateway tower, the rajagopuram. Since Nandi got relieved of his curse here, the names of the temples bodies are named after Nandi; the temple tank is called Nandi Theertham, the vimanam as Nandi Vimanam, the place called Nandipuram and other water body as Nandi Pushkarani. The main sanctum houses the image of the presiding deity, Srinivasa Perumal, the metal image of the festival deity, Jagannatha, the images of Bhoodevi and Sridevi on either sides of Srinivasa. The image of Nandi, which is otherwise part of Shiva temples, is present in the main sanctum. There is a separate shrine for Shenbagavalli Thayar. The rectangular walls around the temple enclose all the shrines and some of seven water bodies associated with the temple. The temple is maintained and administered by the Vanamamalai Mutt. Lord Jagannatha is blessing the devotees from the sanctum facing west. The vimana above presiding Lord is called Mandhara Vimana. Nandhi and emperor Shibi had the darshan of Lord in the temple. 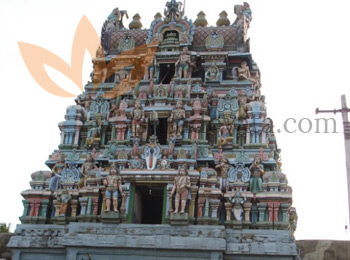 Sri Kola Valvilli Ramar Perumal Temple is considered Vaishnava Sukra Kshetra as Vishnu showed up as a wonderful divinity. The spot determined its name Thiruvelliyangudi consequently and the directing god is likewise alluded to as Velliyan. It is trusted that Vishnu showed up in Kalyana Kolam (marriage stance) to Parasarar, Markendeyar, Mayan, Brahma, Sukran and Bhudevi. Just to ease Vishnu, Garuda , the hawk vahana of Vishnu, gave the conch and wheel of Vishnu is a rising stance. This is the main temple where Garuda is portrayed in such a stance. Sage Parasa is accepted to have done compensation in this temple and henceforth there is a temple tank called Parasara Theertham. A banana plant is seen developing from a stone base and it is accepted to be authentic. Thirumangai Alvar has celebrated the temple in ten verses.

Lord Maha Vishnu in His Vamana Avatar, looked for three feet of area from sovereign Mahabali. Shukra was the Guru of Mahabali. At the point when Mahabali was to offer the three feet area to Vamana, knowing his outline, Shukra took the type of a honey bee and obstructed the handle gap of the water dish to avert Mahabali obliging Vamana's wish. Vamana the Lord, uprooted the honey bee inside (shukra) with a grass stem to encourage stream of the water to solemnize the philanthropy. The stick hit one eye of Shukra. He lost vision of that eye.

Shukra went to numerous spots to recover the one's vision eye, at long last arrived here, worshipped Perumal and got back his vision. Shukra is additionally called Velli. Henceforth, the place's name Velliangudi. There is likewise an alternate story inciting Shukra to pick this spot for his repentance.

Viswakarma, the divine stone worker manufactured a temple for Perumal. Seeing the temple's magnificence, Mayan, likewise a talented stone carver however having a place with evil presence group felt that he couldn't do one for Perumal like this. He drew nearer Lord help him who recommended that he ought to perform retribution on Lord Perumal in this spot. Mayan performed atonement here. Perumal conceded him darshan yet Mayan wished the Ramavatara darshan. Giving him the help, Lord left His plate and conch with Garuda and allowed darshan to Mayan as he wished. So Shukra-Velli picked this spot of incredible brilliance for his compensation to recover his vision. This is additionally a motivation behind why the spot was named Tiruvelliangudi.

The conviction is that venerating Perumal in this temple equivalents to adoring Him in every one of the 108 Divya Desa sanctuaries. Planet Shukra-Venus is venerating Perumal as a steadily blazing light as a token of his appreciation to Lord who restored his vision. Of the Navagraha significance puts, this fits in with Shukra. A plantain that came through rocks still exists here yielding natural products once per year. This is the main Divya Desa temple where Garuda Bhagwan favors devotees with four hands holding disk and conch (chakra and shanku).

The temple practices Vaigasana Agama and Vadagalai tradition. The temple priests perform the pooja (rituals) during festivals and on a daily basis. As at other Vishnu temples of Tamil Nadu, the priests belong to the Vaishnavaite community, a Brahmin sub-caste. The temple rituals are performed four times a day: Kalasanthi at 8:00 a.m., Uchikalam at 12:00 p.m., Sayarakshai at 5:00 p.m., and Ardha Jamam at 7:30 p.m. Each ritual has three steps: alangaram (decoration), neivethanam (food offering) and deepa aradanai (waving of lamps) for both Kolavalvil Ramar and Maragathavalli Thayar. During the last step of worship, nagaswaram (pipe instrument) and tavil (percussion instrument) are played, religious instructions in the Vedas (sacred text) are recited by priests. There are other weekly, monthly and fortnightly rituals performed in the temple as in other Vishnu temples in South India. Vishnupathi Punniya Kalam, an auspicious time during the first days of Tamil months of Vaikasi, Avani, Karthigai and Masi is celebrated in the temple seeking divine auspices from Garuda.

One can reach this Divya Desam by taking Town Bus No. 2 (low frequency) from Kumbakonam. However, it is better to take the Kumbakonam – Chennai bus and get down at Sholapuram (about 20kms from Kumbakonam). From Sholapuram, one can take an auto/car to the temple (6kms) and come back again by the same auto to Sholapuram. This will cost about Rs. 100-120 (to and fro).