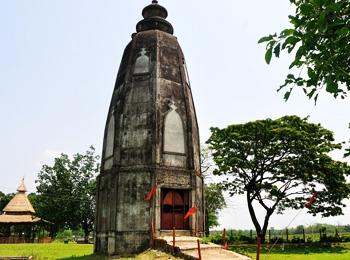 It is situated in Goalpara district in Assam. It is an ancient center of sun worship and there are numerous insufficiently explored archaeological remains around it. Literally an art gallery of sculptures, Surya Pahar (Hill of the Sun) is dotted with ruins of several old temples. A modern Sun Temple is also situated on the hill. Sun worship, as in other parts of India, goes back to ancient times in Assam. Assam has often been referred to as Pragjyotishpura. According to the Kalika Purana written in the 10th Century B.C., Brahma created Pragjyotishpura as a city equal to the city of Indra - The King of the Devas. The word "prag' refers to the "east' and "jyotisha' refers to star-astrology. Pragjyotisha is thus said to mean, "eastern city of astrology'. The Surya Pahar is an ancient Sun Worship Centre. It is best known for the confluence of three religions, viz., Jainism, Buddhism and Hinduism. It is a treasure trove of ancient monuments that surround the temple. Local legend has it that around 1, 00, 000 Sivalingas were spread out on the hillside, but due to neglect and pilferage, not many remain. The hill is also an attraction for wildlife and adventure enthusiasts as it is home to rare primates and innumerable species of medicinal plants, many of which are yet to be identified. There are also opportunities for rock climbing and trekking. Recent archaeological finds indicate that an ancient civilisation flourished in and around Surya Pahar. The accounts of Huien Tsang, the famous Chinese traveller, and the unearthed relics augment the claim that it was Sri Surya Pahar, and not Guwahati, that was Pragjyotishpur - The capital of the King Bhaskarbarman. Findings at the nearby site of Pagletek have further boosted the basis for such claim.