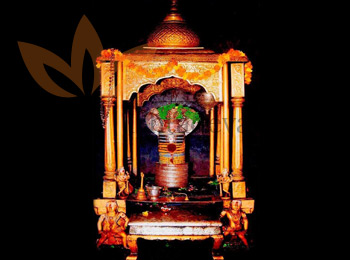 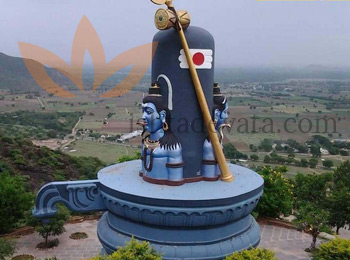 Kotappakonda temple is considered to be the very famous temple and to reach the temple one has to climb stairway of about thousand steps. There are four temples located in the temple complex of Kotappakonda temple. One of the temple is located at the base, the other at an elevation of about 600 feet and the main temple stands at a height of 1500 feet. The special feature about the temple is that we cannot find a single crow around the temple surroundings. The three peaks are named after the Hindu Triumverate, Brahma, Vishnu and Maheswara. The epigraphs at Kotappakonda clearly state that the deity established in the shape of Sivalinga on the hill top is known as Trikuteswara or Trikoteswara. A steep flight of steps lead to the hill and the deity is located at a height of 1,587 feet. There are a number of ponds on the hill of which eight are located in front of the temple. Mahasivaratri, which falls during February-March, is the important festival celebrated here with great devotion and fervor every year and a large number of devotees throng the place. The sleepy village comes alive on the eve of Mahasivaratri. Milling crowds occupy every inch of the space on and around the hill.'Prabhas', rectangular frames tapering at the top made of bamboo and decorated with colored cloth and paper, of different sizes are taken in procession as part of the festival. Most of them are 60 to 70 feet high and are carried by the devotees. But the giant prabhas, rising to a height of over 100 feet, are carried on decorated and lighted bullock carts accompanied by a large following. They are placed on a meadow at the foot of the hill. Large manpower, money and material is needed to erect these prabhas and promote a spirit of cooperation and unification enthusing the villagers. Of late it has been given a face lift with many facilities and attractions for not only the devout but an average tourist sojourn and serenity. The place is all set to become a major tourist attraction, providing "Rakthi, Bhakthi and Mukthi" (entertainment, devotion and salvation) to the visitors. The local MLA and Minster for Medical & Health, Sri.Dr.Kodela Sivaprasada Rao has taken a lot of initiative in mustering funds from the government as well as private parties to develop the place as an integrated project.

Other attractions near the temples 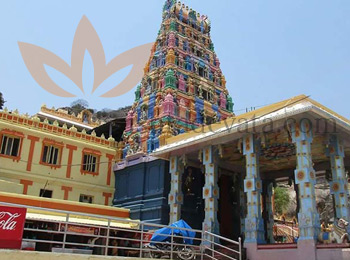 The temple precincts and the sanctum sanctorum are renovated and Bharathi Teertha Swamijiof Sringeri Peetham consecrated the deity in the new premises. A "View Point" is erected on the corner of the hill to provide a breathtaking overall view of the surroundings. A ghat road was constructed to ease the climbing and allow the pilgrims enjoy nature's bounty in its full splendor, in place of an arduous climb up the steep steps and also to accommodate the growing number of visitors. The entire stretch of the road is lighted and a deer park is developed on the way. A small lake is created on the hill, depicting "Kaleeya Nardhana", with the statue of Lord Krishna dancing on the head of Kaleeya (a venomous snake) was placed with special lighting effects in the middle of the lake. Water flows into the lake from various watershed programs developed at many places on the hill, a blend of modernity with past. Another attraction for the tourists is the artificial jurassic park with mobile dinosaurs of monstrous size developed by a private company at a cost of Rs. 1 million. Sanctuaries for peacocks, doves, emos and parrots were developed by the Forest Department. Four VIP guest houses and a 30-room choultry was constructed by the Endowments Department and the TTD to cater to tourist needs. All this was done on a war footing in a little over two months. Yet another feature of the integrated tourist project is the meditation center, constructed on the lines of the one at Mount Abu, on the top of the hill and an exclusive "Yaga Shala" for conducting 'homam' (holy fire) with a sprawling dining hall. On the anvil are a ropeway to provide a view of the various tourist spots and a museum to house the artefacts that were discovered in the excavations.


According  to the legends, Lord Shiva destroyed the "Daksha Yagam' due to  anger and Lord Shiva reborn as a twelve years boy,  with a good deal of self-discipline commenced penance as Dakshana Murthy in Kailasam.  All the devas approached him and asked Dakshana Murthy to impart the knowledge of  "Brahma".  Dakshana Murthy consequently asked the Lord to come back to Trikoota hills,  wherever he imparted them the knowledge of “Brahma”,  making the hill extremely sacred. Based on another history of the temple, Salankavya was a staunch follower of Lord Shiva. Pleased by his devotion, Jangama Devara visited his house daily and consumed milk. But after sometime,Jangama Devara disappeared. Salankayya searched for him in every nook and corner of the region and could not trace him anywhere. Out of disappointment, Salankayya stopped consuming food and water.  There lived a cowboy known as Sundudu with his wife Kundiri in side of Trikoota hills. They had a beautiful daughter known as Anandavalli. They became wealthy after her birth. Anandavalli was deeply dedicated to Lord Shiva and wasn’t fascinated by her wordly life. She forever spent her time in singing the glory of Lord Shiva and regularly offered prayers at  Koteswara hills.  She was not inclined to alter her method of life and commenced penance for Shri Koteswara Swamy. Happy with her penance Jangama Devara appeared before her.  After that she understood that Jangama Devara was the one, who used to consume milk in the house of Salankayya. After that, she regularly visited Rudra hills, when celestial tub offered milk . When Salankayya came to know the presence of Jangama Devara, he approached Anandavalle and requested her to allow him to see the God, so that Jangama Devara would shower his blessings on him. But Anandavalle did not accept the request of the Salankayya as she was engaged in her deep penance. Anandavalle continued her visit Rudra hills to perform prayers. At some point she collected a pot of water from celestial tub and when keeping it at a secure place, went to acquire “Maredu leaves”.  At that time, a crow came that sat on the pot, and with its weight, the pot fell down spilling out the holy water. Anandavalle became furious and cursed that no crow should enter the area. Till now no crow can be seen on the Rudra hill. Jangama Devara happy with her penance, appeared and imparted her the divine knowledge.  Jangama Devara wanted her to lead a worldly life as she was pregnant.  Unmindful of her physiological state, she continued her daily prayers as usual.  But Jangama Devara once again appeared and told her that she needn’t take such troubles in pooja activities and also promised her that he would come to her house, asking her to proceed without turning back.  Anandavalle consequently proceeded towards her home and Jangama Devara came down from Rudra Mountain and followed her. When reaching Brahma hill, Anandavalle lost her patience and turned back. Immediately Jangama Devara reminded her of the promise and stopped at Brahma hills, entered the cave of hill and turned himself into a symbol. This sacred place is currently known as Kotha Koteswara temple. Anandavalle stayed there and, in the meantime, she delivered a boy. She repented for her action of seeing back,  inspite of caution given by Jangama Devara and set to finish her life.

The nearest airport to reach Kotappakonda Temple is Gannavaram airport, which is near Vijayawada.

The nearest railhead to Kotappakonda Temple is Narsaraipet. Buses are available from Chilakaluri pet, Vijayawada, Hyderabad to reach the temple. And there is also a route to reach Kotappakonda from Addanaki via Santha Maguluru and Minnekallu.