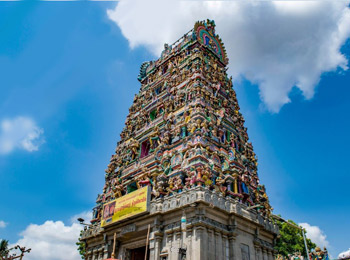 This ancient temple is connected to the Ramayana period. According to the history, Sri Rama on His way to Sri Lanka rested here in this place which was then a forest. While resting under an Amla tree (‘Nelli’ in Thamizh), He realized that there was a Shiva Lingam under the ground and his feet had touched the head of the Lingam unknowingly. Ramanadheswara temple is situated at porur chennai. It is famous for Guru (one of the navagraha temples).

The temple was constructed by II Kulathunga Cholan around 700 AD. History says Lord Rama searched for Seetha in this place. By Mistake Lord Rama kicked a Sivalingam and he realized his flaw, then Shiva appeared and gave directions to Lord Rama to reach Srilanka. Lord Shiva is considered as Guru. There is no seperate Guru sanidhi. Sri Rama acquired a Dhosham as He had touched the Lingam with His feet. So he undertook a penance towards Lord Shiva for 48 days with just one Amla fruit as his food, to recover from the Dhosham and to bring out the Shiva Lingam. Lord Shiva pleased with Sri Rama’s penance came out from the earth and blessed Sri Rama with his Viswaroopa Dharshan.

The nearest airport is Meenambakam Airport.