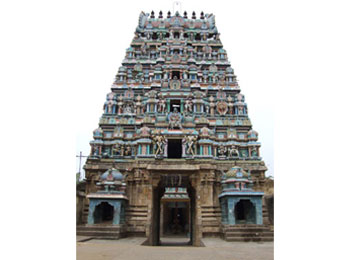 The temple is 8 kilometres from Thirupanandal on the Chennai-Kumbakonam Road. 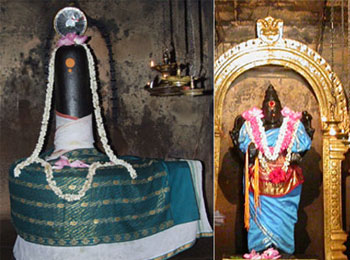 Thirumangalakudi is known as Panchamangala Kshetra. The name of the spot is Mangalakudi. The Goddess is Mangalambika. The tower is Mangala Vimanam. The Holy Water is Mangala Theertham. The Vinayaka is Mangala Vinayaka. Everything in the sanctuary is yet Mangala – Prosperity. The wonderfulness of the sanctuary is commended in the songs of Saint Tirugnana Sambandar. This is the 38th Shiva sanctuary on the northern bank of Cauvery said in Thevaram psalms The Navagrahas in the sanctuary kept an illness to occur for on Kalama Muni. Irate Brahmma reviled planets with that sickness. They resulted in these present circumstances place, performed retribution on the Swayambu Linga Shiva and got mitigated of the condemnation. It is hence vital that Lord Shiva of the sanctuary cured the infection of the planets themselves who have a control over the lives of people. Ruler Prananadeswara is His very own Swayambu exsisting. Goddess is all blessingful. There is no exceptional spot for the Navagrahas here. It is trusted that the planets in the Suriyanar Temple are the ones having a place with this sanctuary. It is in Thirumangalakudi sanctuary that even the Planets got alleviated of their condemnations. The Lord has three appearances speaking to human, creature and birdis own structures, an uncommon one not found in different sanctuaries. Here, Brahma the Creator, Vishnu the Protector, Sage Agasthya, Sun, Akashvani, Mother Earth venerated the Lord. There are two sacred waters here called Chandra theertham and Suriya Theertham. There are two Nataraja Sannidhis here. This was remodeled by Kualothunga Chozha in the fifth Century. The sanctuary is controlled by Thiruvavaduthurai Adheenam. 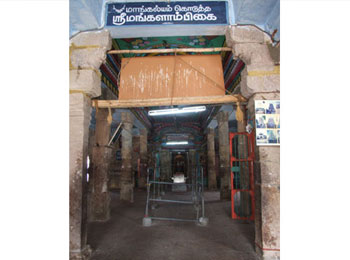 The presiding deity is Prananadeswarar (Shiva) and the Goddess, Mangalambigai (Parvathi). The main deity is believed to be Swayambu Lingam(self-formed).

Minister Alaivanar was requested to be executed by King Kulothunga in the eleventh Century for building a sanctuary from the incomes of the nation without acquiring the his authorization. The pastor asked for that he be cremated in Thirumangalakudi. His body was conveyed to the spot as wished by him. His significant other went to the Mangalambikai sanctuary and looked for the beauty of the Goddess for getting back her better half which was reacted by a sound from the air. The pastor woke up. He went to the sanctuary, grasped the Lord calling him Prananadeswara. As thriving means a wedded life till the end (Mangalam) and as it was conceded to the lady in trouble, the Goddess is known as Mangalambika.

Devotees hold curd rice on Vellerukku leaves between 12-12.30 noontime time, offer it as nivedhana to Lord and partake in the pujas in the prakara ceaselessly for 11 Sundays for alleviation from planetary issues and cure from all infections. Love of Mother Mangalambica for five sequential Mondays guarantee wellbeing to the Mangal Sutra favoring, alleviation from the unfavorable parts of the serpent planets Rahu and Ketu and of Sani Bhagwan. The worship additionally evacuates delays in marriage undertakings in families. Devotees perform abishek to Lord and Mother and offer vastras. They likewise take after a guarantee of regarding five Sumangalis-wedded ladies with turmeric, kumkum, blossom, betel nut, a brush, hand mirror, bangles, Mangal Sutra string, a shirt bit and cash and look for their endowments. Abishek to Lord is performed with restorative powders, oil, rice flour, nectar, milk, panchamirtham, curd, organic product juices, green coconut, shoe and consecrated cinder. The individuals who can bear, sort out encouraging Annadhana.

As a rule, those facing any adverse planetary problems and visiting Suryanar Koil, should place their prayers first in this temple before proceeding to Suryanar koil. Married woman receive the Mangal Sutra thread from Ambica directly for a long marital life.  Devotees pray here for child, wedding boons and long married life, for freedom from enemy threats and theft fear.