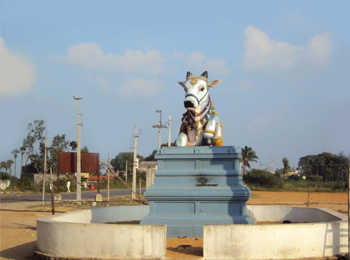 Palli Kondeshwarar Temple is a Hindu temple dedicated to the god Shiva located in Suruttapalli, a village in Chittoor district of Andhra Pradesh close to the border of Tamil Nadu, India. Suruttapalli is located 55 kms away from Chennai on the Chennai Thirupathi highway. 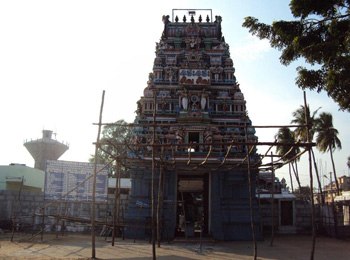 This temple was built during the late Vizianagara period and the deity here is termed as Bhogasayana Shiva. This idol of Shiva is unusual. Most Shiva temples contain a Lingam, his symbol, as the central icon. The gods Ganesh, Karthikeya, Surya, Chandra, Indra and sages such as Naradha are seen standing around Shiva.

Indra, king of the Devs lost his position due to the curse of Sage Dhurvasa. The demons drove him away and usurped his kingdom. Brihaspathi, the Guru for the Devs told him to regain his strength by consuming the nectar churned out from the milk ocean. With Lord Vishnu’s help, both Devs and the demons began to churn the ocean using the great snake Vasuki and Mandara hills as the churning tools on an Ekadashi day. The snake began spitting its venom. Everyone appealed to Lord Shiva to protect them from gas emanating from the poison.

Shiva sent Sundharar born from His shadow to collect the poison and bring it to him. Sundharar brought it as a blackberry. Devs cried, “Oh! Lord Shiva, all creatures in all the worlds would perish even if you throw it out or swallow it yourself.” Lord Shiva became Vishwakarana Moorthy – absolving the effects of the poison and swallowed. Goddess Parvathi was shocked and immediately pressed the neck of the Lord not allowing it below the throat. The poison stayed at His neck and the Lord came to be praised as Neelakanta (the one who is blue necked). He left for Kailash with Goddess Parvathi then. On His way back, the Lord relaxed here. As the Lord placed His head on the lap of Goddess Parvathi, he is named Pallikonda Eashwarar (Lord in reclining form).

Shivarathri in February-March, Ayppasi Annabishekam in October-November and Thiruvadhirai in December-January are the festivals of the temple.

Suruttappalli is the place, where Pradosha pooja first began. If devotees worship Pallikonda Eashwara, who swallowed the venom to save the world on Pradosha day falling on a Saturday, they will recover losses. Those who were demoted will be reinstated in their proper position again with promotion too. Obstacles in wedding proposals will not disappear. Couples who are separated will see re-union in life.

The nearest airport is in Chennai.

The nearest railways station is in Tiruvallur.