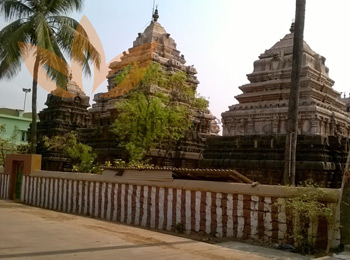 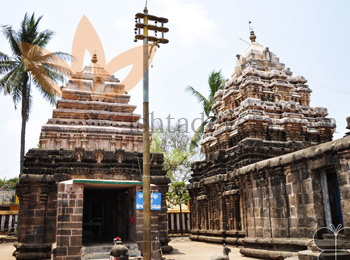 The temple is built by the Eastern Chalukyas in the 9th-10th centuries. The temples are a fine example of the architectural grandeur that was typical of the Dravidian style.  A stone sculpture of Ganesha in the village is a masterpiece of Chalukyan craftsmanship. The name Biccavole derived from the ruler of Turupu Chalakya Vamsam, during their period 849-892 BC and the rulers constructed number of important temples during their period around the Biccavole village. Among these temples, Shri Raja Rajeswari temple and Shri Chandrasekhara Swamy temple are very prominent with great Silpakala nypunyam. In between Rajahmundry and Samalkot, a village named Biccavolu is seen, which contains several important temples of the Eastern Chalukya period. The village is named after the king Gunaga Vijayaditya III. In the vicinity of the village, in the fields stand three temples, and a monolithic Ganesh .  Within the village another group of three Shiva temples are under worship, including Ganesha in the fields.

The central shrine of Golingeswara has an iconographic material around it, and a beautiful Shivalinga and 33 lines sasanam on the door jambs. In the Mukhamandapam of the temple of Shri Golingeswara, are preserved two exquisite masterpieces of eastern Chalukyas sculputure. One represents Shiva and Parvathi in the form known as Alingana Chandra Sekhara Murthy and the other a seated figure of Ganesha.  Both these are great masterpieces. There are there niches on all three sides - one devoted to Ganesha and one to Kartikeya on peacock and the third to Mahishasura mardini and a beautiful Shivalinga along with Rajarajeswari deity. The height of the Lord Ganesha is 11ft, the biggest in the history of eastern Chalukyan sculpture, attracting hundreds and thousands of devotees every day with green fields.  Till the time of King GunagaVijaditya, only a single pair of arms of Ganesha existed and the additional pair is now created.  This idol is a beautiful work of art, with Ganesha on one side and Lakshmi on the other. The idol is now at Chennai Govt. Museum. Shiva Temple I is situated on the outskirts of the village with features similar to central niches on the three sides with the decoration and figures in them. Out of these, a striking figure is Shiva dancing in the chatura pose in his Nataraja from. A prominent feature here is the presence of Lakulisa in exactly the same form as seen in Orissan sculptures. Lord Shiva shrine (Shivalinga) is the main attraction to the devotees. There is a large plain temple in the fields. Here, there is an almost total absence of figure sculpture as even the niches are bare, except for the carving of the dwarapalakas on the door jambs and Lakshmi on the lintel. The architectural features are very interesting for a study of Eastern Chalukya temple structure which follows the Dravida type inspired by Southern traditions. The vimana is the main source of inspiration even for the Pattadakal group and the famous Rashtrakuta monument at Ellora. The doorway of this temple has a unique feature, as it shows the two rivers Goddesses Ganga and Yamuna on either side.  On the tiers above, there are several figures representing iconographic forms and motifs like the mithuna, which are excellent materials for study. The figures of Surya and Vishnu are similar to the figures on the tiers of Shri Golingeswara Swamy temple. The Archaeological Survey of India is looking after the temple monuments watchfully.


The main deities are Shri Golingeswara and Shiva. The other deities are Goddess Raja Rajeswari , Shri Chandrasekhara, Lord Ganesha.

Buses are available from all major places in Andhra Pradesh to Rajahmundry which is 35 km away. Buses ply frequently from here to reach the temple.

The nearest railway station is Biccavolu Railway Station which is 3 km away. Bus and auto services are available to reach the temple.

The nearest airport is Rajahmundry Airport which is 39 km away. Bus and taxi services are available to reach the temple.