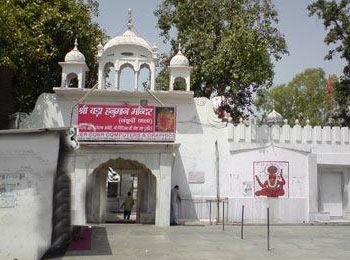 Amristar is a major city located in the state of Punjab, India. The city has a famous Hanuman Mandir located on the north western side of the renowned Durgiana temple. The temple called Sri Bade [Bara] Hanuman Mandir is more popularly called the Langoorwala Hanuman Mandir in that locality.

Lord Sri Rama is said to have performed the Ashwamedha yajna which is a ritual usually performed by the Emperors. The ritual involves letting a horse (Aswam) loose, and claiming those places that the horse set foot as the Emperors own territory, incase the horse stands unchallenged by anyone. Devi Sita, the consort of Lord Rama was living in exile along with her twin sons in Sage Valmiki’s ashram, when Lord Rama performed this Ashwamedha Yagna. The young and brave Luv and Kush is believed to have challenged the Aswamedha horse, not knowing that it was set out by none other then their father Lord Sri Rama. Once challenged, both the sides have to fight and win the battle in order to claim ownership of the land. Initially Sri Rama's brothers were defeated by the young twin brothers. Sri Hanuman who is considered the most obedient disciple of Sri Rama, was sent next to confront Luv and Kush. The sons of Sri Rama had tied Sri Hanuman to the banyan tree. Lord Rama himself is then said to have come to fight the kids, after which he realized that Luv and Kush were his own children. Hence the family was reunited.

This temple has an ancient banyan tree which is considered the same tree where Luv and Kush tied Lord Hanuman. Devotees wishing to have a male child, tie a sacred thread on this tree.

The festival of Navratra is the most celebrated festival in this temple since that it when the devotees visit the temple to untie the thread, on the successful fulfilment of their wish to birth a male child. This annual function starts with the commencement of navratras. There are people from far off places, even from aboard who visits this temple during this festival.

Just like how Bengalis celebrate 'Durga Pooja' and Gujaratis celebrate 'Dandiya', Amritsar celebrates this 'Langoorwala Mela'. Many couples seek the blessings of Lord Hanuman for a male child. When their wishes are fulfilled, they come here to pay their tribute to the Lord for his blessings.

Couples seeking male child, tie a thread on the ancient banyan tree of this Bara Hanuman temple and on the fulfillment of their wishes, they come here during 'Navratra' along with the male child to untie the knot tied by them previously. During these nine days of Navratri, they observe strict fast, including sleeping on the floor. They intake food only once a day in the form of only raw vegetables and fruits, avoiding even cooked food. The much revered part of Ramayana, the Sundhara Kant, is recited throughout these nine days by these devotees. During this festival, the male child is dressed as langoors adorning bright red dresses lined by gold or silver borders. Their faces are smeared with fuller's earth and a big tail with an artificial mace to give a complete look of a langoor.

How To Reach Amritsar

Amritsar Railway Station is the major station in the city which is well connected to most major cities of India including Delhi, Mumbai, Chennai, Hyderabad, Ahmedabad, Kolkata, Agra, and Chandigarh, among others. A train journey from Delhi to Amritsar takes a little over 6 hours.

Public and private buses are available in plenty connecting Amritsar with other cities like Delhi, Dehradun, Shimla, Jammu and other towns in North India.