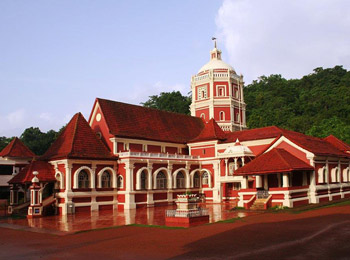 The Shri Shantadurga Temple is a large temple complex at the foothills of Kavalem village in Ponda Taluka,Goa, India. A small laterite mud shrine was built and the deity was installed here.

The pyramid shape 'shikaras' that rise on the roofs of the facade (entrance hall) and the 'Sabhamandap' (the main hall), its roman-arched windows, some of which have the stained-glass window panes of deep red, yellow, blue, green colours, its chandeliers, its gate posts, balustrade flat dome, the maroon-peach-white colour paint of the temple gives the temple a serene beautiful look. The highlight of the temple is its golden palanquin (palkhi) in which the deity is carried on festive occasions (Mahapanchmi).

The temple is dedicated to Shantadurga, the goddess who mediates between Vishnu and Shiva. The deity is also called 'Santeri' colloquially. Purana tells story of a battle between Shiva and Vishnu The battle was so fierce that the God Brahma prayed to Goddess Parvati to intervene, which she did in the form of Shantadurga. Shantadurga placed Vishnu on her right hand and Shiva on her left hand and settled the fight. Shantadurga is shown as holding two serpents, one in each hand, representing Vishnu and Shiva. Apart from this battle, local legends often say that Shantadurga of Keloshi had gone to Sankhwal, a village in Salcette Taluka to kill a demon named Kalantak that was harassing the Brahmins. As a reward, she was given the name of Vijaya. The Vijayadurga shrine was located in Sankhwal along with Shantadurga and Lakshmi Narasimha but was later shifted to a place called Kerim in Ponda Taluka during the Portuguese invasions.

The original temple at Quelossim (Keloshi) in Salsete was destroyed by the Portuguese in 1566. The goddess was shifted to Kavalem and worship was continued there. The site on which the original Temple of Shantadurga stood at Quelossim (Keloshi) is known as "Deoolbhata" and it is in the possession of the Temple Committee. The temple complex is on the slope of the foothills of a mountain chain, surrounded by lush vegetation. There is a main temple and three smaller temples of other deities which have been built on three sides of the temple. The temple consists of a collection of pyramidal roofs with a dome. The pillars and floors are made of Kashmir stone. The temple has a huge tank, a Deepastambhaand agrashalas.

The annual zatra, which falls in the month of Pausha Shuddha Navami, draws thousands of devotees from all over the Goa.

The nearest airport to Kavalem is in Dabolim. The nearest town of Ponda is located at a distance of 17 km from Carambolim railway station. The major railway terminus of Margao has bus services catering up to Ponda. Local bus services operated by private bus owners ply regularly from Ponda Bus Stand. Motorcycle pilot bike rides from Farmagudi (situated on the Ponda-Panaji road) are available.