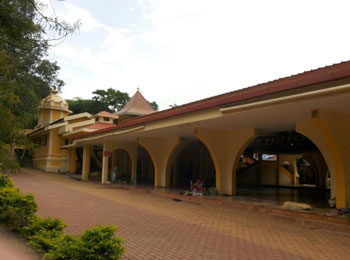 The deity of God Ganesha is worshipped at the ancient Mahaganapathi Temple which is located at Candola in North Goa. The temple is one of the oldest in the region and is quiet famous in the region. Thousands of devotees visit this temple during the year to seek God’s blessings.

The temples of Goa are famous for their historic significance as most of them date back to 13th-15th centuries. The temple of Mahaganpathi is one of these historical temples. It is located in the Khandola village. It was initially situated on the Divar Island and was destroyed by the Portuguese in 1540. Before the destruction, the devotees took the deity to the Khadepar Village of Ponda Taluka for protection from Portuguese. The deity was later moved to Narve Village after a few years but has to be moved back to Khandola in 1750 due to some reason. The deity since then is enshrined in this temple. 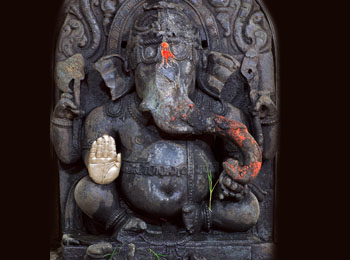 The temple committee after several years decided to replace the deity with a new one. The new deity of God Ganapathi was installed in the temple after the ‘prasad ritual’. The other two deities are presently enshrined in the garbhagriha, one is the old deity of the 13th century and the other one is the new deity established in the year 1969.

The festivals of Sankashti Chaturthi, Dussehra, Tulasivivah, Ramnavami and Anantvrata are celebrated at the temple with great joy. The temple is decorated with lights and diyas during the celebrations.

The international airport of Goa is nearest to the temple.

The railway station of Vasco Da Gama is nearest to the temple. It is only 35kms away from Candola.

Frequent bus service is available from the Panjim Kadamba Bus Stand to the temple. It is located 19kms away from Candola.