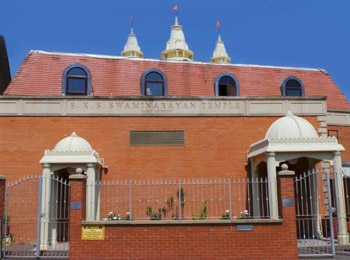 
This is a Swaminarayan Templein east London, in the London Borough of Newham that comes under the Narnarayan Dev Gadi and is part of the Hindu faith.


The main Hindu temple has an upper floor that is used for seminars and other gatherings, and a library selling books and other religious material. A kitchen and dining area a few doors down, which was previously used as a temporary Mandir while the main Mandir was being reconstructed. The organisation is a Charity Registered and was formed in 1986.


This is the Youth Wing. According to Swaminarayan Sampraday holy scriptures each and every occasion is celebrated with great festivity. These include occasions such as, Rama Navami, Janmashtami, Diwali, Ankoth, and so on, with special inclusions of annual anniversary celebrations of the Temple followed by 5 to 7 days Katha Parayan in the presence of saints and the Acharya. Boys & Girls Sabhas, Dhol Lessons, Summer fun-days out, Treasure hunts, Christmas fun-days, Shikshapatri evening lectures, are some of the activities of the Yuvak Mandal of East London Swaminarayan Temple. The Temple is in the run-up to its Patotsav celebrations, celebrating the completion of 25 years in the community. Large celebrations are planned to take place from Monday 26 August till Sunday 1 September 2013, including a Nagar Yatra (public street parade).


The city is accessible by air and connected well by road and rail.