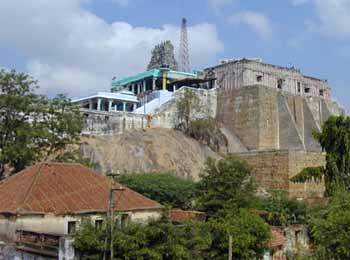 Kunnakudi Shanmughanathar temple (also called Kunnakudi Temple or Kunnakudi Murugan Temple) in Kundrakudi, a village in the outskirts of Karaikudi in Sivaganga, Tamilnadu, is dedicated to the Hindu god Murugan. The temple is constructed in the Dravidian style of architecture; the temple is located in the Tiruppattur – Karaikudi Road, around 14 km from Karaikudi.

The hill 40 m tall (130 ft.) and occupies an area of 6.5 acres (26,000 m2). The temple has a five tiered Rajagopuram, the gateway tower rising to a height of 16.5 m (54 ft.), which pierces the granite wall surrounding the temple. The sanctum faces East and the image of the presiding deity Murugan is sported with the images of his consort Valli and Deivayanai, each of whom are seen sitting on a peacock.

There are shrines of other deities around the sanctum in the precinct. There are three caves in the western side of the lower hill, with rock-cut images dedicated to Shiva in each of them. The first two caves have intricate rock-cut sculptures and Dvarapalas on either side of the sanctum, while the third one is plain. There are various sculpted images of Vishnu, Durga, Lingodbhava, and Harihara. The image of Dvarapalas in the caves, on either sides of the sanctum, with each leaning in the direction facing the sanctum, are found to be the earliest representation of the images. These are not found in Pallava architecture, which precedes the Pandyas.

The caves are considered one of the major specimens of rock-cut architecture of the Pandyas, counted along with Vettuvan Koil, Thirumalai Puram and Thiruparankundram. As you climb the steps (which are not very tiring) you come across the Sannidhi of Idumban. At the top of the steps you can see the Sannidhi of Vallabha Ganapathy. As you enter the main sanctum you are mesmerized by the beauty of Lord Shanmuga with his six faces and twelve arms sitting in a beautifully carved peacock The peacock and the Lord are of monolithic (carved out of a single stone). His consorts Valli and Deivanai have their own peacocks as their Vahanas. In a crowded day it may not be possible to leisurely look at these beautiful sculptures). As you come out of the sanctum, you can see the beautifully carved pillars. The hill is in the shape of a peacock. As Muruga’s peacock vehicle was relieved of its curse here, the hill is called Mayil Malai-peacock hill.

For many, the hill appears in a peacock form. Lord Muruga is also known as Chetty Murugan, Kundrayur Udayan, Mayuragirinathan, Mayil Kalai Kandan, Kundrai Murugan, Thenattrunathar etc. The temple is praised in the Thirupugazh hymns of Saint Arunagirinathar. The Theerthams of the temple are Saravana Poigai, Thenaru and Mayil theertham. The special feature of the temple is that Valli, Deivanai and Lord Muruga grace darshan individually sitting on a peacock.

There are evidences that enlightened souls lived here. There are also some Brahmi epigraphic evidences in the Jain Ashrams-Pazhis. Idumba from Kalinga carried a Kavadi to this temple and got his stomach pain cured. There are also shrines to Vinayakar, Kuzhandai Vadivelar, Meenakshi Sundareswarar, Dakshinamurthy, Natarajar, Chandeswarar & Navagrahams. Images of Veerabahu and Idumban are also in this temple

The temple is under the control of Kundrakudi Aadhinam and maintained by them efficiently. At the bottom of the hill, there is a small temple for Lord Ganesh who is the brother of Lord Muruga and another temple is also at the bottom of the hill itself for Lord Muruga in the name Lord Palani Murugan. In this Palani Murugan temple the main statue is not fixed on floor and set up in a bar because this statue is brought from Palani by the Kundrakudi Pada yatra group people every year at the time of Thaipoosam festival.

Different Names of this Place

The place was originally called Kundrakudi as it was located in a hill (Kundram means hill in Tamil), which with the period of time became Kunnakudi. It is also called by other names like Mayuragiri, Mayilmalai, Arasavaram and Krishanagaram as the hill resembles the shape of a peacock.

As per Hindu legend, sage Agasthya is believed to have worshipped Murugan at this place.

10 day Panguni Uthiram in March-April and 10 day Thaipoosam in January-February, are the two great festivals in the temple. Paal (milk) Perukku vizha in Chithirai (April-May), Vaikasi Visakam in May-June, Aani Mahabishekam in June-July, Aadi Tirupadi Puja in July-August, Aavani Moolam Pittu Thiruvizha in August-September, Skanda Sashti and Arrow festival in October-November are the festivals celebrated in the temple very grandly.

This is the most important shrine in Tamilnadu for submitting our prayers to the Lord. A sincere worship in the temple ensures the devotee a healthy life free from illness, freedom from various problems, child boon, longevity, education, prosperity, high yields in farms. Kundrakudi Kavadi is very famous. While mentioning anything impossible, a proverb goes, “It will not be possible though one carries Kundrakudi Kavadi”. It means indirectly that carrying Kundrakudi Kavadi would never let down the believer.

The nearest airport is Trichy & Madurai.

Rail head Karaikkudi is a major station with trains from Chennai, Trichy, Madurai.

Kundrakudi is 10 km from Karaikudi and 12 km from Tirupathur. Plenty of buses are available from Karaikudi, Thirupattur, Sivagangai, Madurai and Trichy.