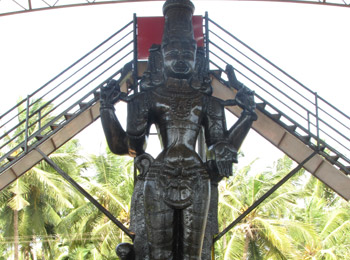 The Shani mandhir of Rakshbhuvan is situated on the banks of the Godavari river. It is one of the oldest temples of Shani Maharaj, who is one among the Navagrahas (planet gods). The temple is considered holy by the pilgrims who offer prayers to Shani Bhagvan for their wellbeing. On the occasion of Shani amavashya, thousands of pilgrims come from Maharashtra and other neighbouring States to earn the blessings of Shani Maharaj. Apart from this, is a holy temple of Panchaleshwar, the god of Mahanubhava sect. It is considered as an important cultural centre for them. It is believed that God Dattatraya takes his lunch here every day.

Shani Dev Utsav is held every year at Rakshasbhuvan on the Paush Shukla Paksha Ashtami tithi or the eighth day of the waxing phase of moon as per traditional Hindu lunar calendar followed in Maharashtra. People from nearby towns and villages arrive to participate in this annual fair and festival. Sacred poojas and special rituals are performed to Shani Maharaj during that period.

The ideal time to visit the place is from October to March.

Those having trouble in horoscope (birthchart) due to Shani or Sade Sati get relief after offering prayers in this well-known Shani Kshethra.

The closest domestic airport is Aurangabad (133 km), while the nearest international airports are Mumbai (418 km) and Pune (250 km).

Beed is well connected by road to major towns in the state. The National highway no 211 that runs from Ahmadabad to Hyderabad passes through the town. Maharashtra State Road Transport Corporation buses and some private owned travel agencies offer bus services to the main cities of the state from Beed.