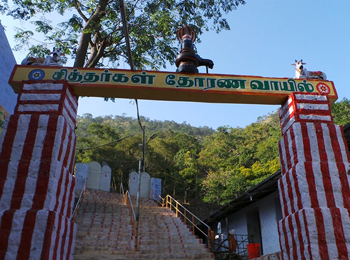 The Sathuragiri Mahalingam Temple is located in Srivilliputhur and is dedicated to God Sathuragiri Mahalingam. The temple rests on a mountain known as Thenkailayam or South Kailash and is also referred to as the Bhoologa Kailayam as this is where God Shiva and Parvathy promised the Siddhars that they would reside permanently. It is also said to be the head quarters of all Siddhars. In the Siva Puranam it is said that the four Vedas joined together to form this mountain - hence the name Chathur(ved)agiri. There is a "Periya Mahalingam" Big Mahalingam, a sanctum of God Siva at the top of the hill where the siddhars go to worship. Not easily accessible, it can be reached only with the help of the local tribal people called the "Palingargal". Shiva and Parvathi were at Kailash where saints, ganas, siddhars and sanyasis worshipped them by doing pradakshinam. The story goes that the Bringi Maharishi did the pradakshinam only to God Siva. When the angry Parvathi asked Shiva, he said that those who have given up all earthly desires and think only of Moksha, would do this, while those who wished to enjoy "Ishta Kamya Moksha" would worship both of them. Parvathi cursed Bringi Maharishi who lost all the flesh from his body since flesh is in Shakthi (Parvathi) form. He could not stand without the flesh in his body and shiva gave him a stick, using which, the Maharishi walked away. Parvathi then wanted to be the "Ardha Nari" of Siva and wanted to do a pooja/thavam/penance to achieve that. She came here to this hill and sat under the "Kallala Tree" near the Sattanadha Muni Siddhar cave, to meditate. It hadn't rained here in 12 years, but once Parvathi came here, the land flourished. She made a Prathishtanam of the Linga with sandalwood paste and worshipped it with flowers, mantras and meditation. God Siva appeared on his "Rishaba Vahana" and granted Parvathi her desire. He also said that this Lingam must be worshipped only by those who seek Moksha, blessed everyone and left.