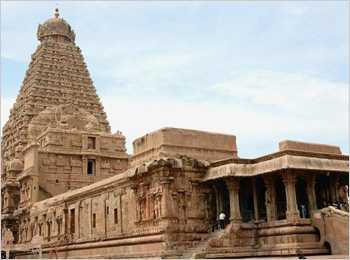 Peruvudaiyar Kovil, better known by its more famous moniker, Brihadeeswarar Temple, Rajarajeswaram or the RajaRajeshwara Temple is located at Thanjavur in the state of Tamil Nadu in India. Dedicated to Lord Shiva, it is a luminous example of the heights attained by Chola architecture. A World Heritage Site as designated by UNESCO and is a reflection of the power of Raja Raja Chola I, who was a patron. An integral part of ancient Indian architecture's greatest glories, it is today a UNESCO World Heritage Site as 'Great Living Chola Temples'. 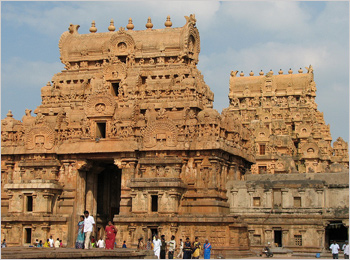 The first rectangular wall surrounding the main temple is 270 metres by 140 metres and marks the outer boundary. The main temple lies in the centre of a spacious quadrangle and is comprised of one sanctuary one Nandi, one pillared hall, one assembly hall or mandapa and several sub-shrines. The most significant part of this temple is an inner mandapa. Massive walls surround it, which are divided with sharply cut pilasters and sculptures into levels providing deep recesses and bays. Each side of the sanctuary has one bay that emphasizes the main cult icons. Karuvarai (Karu means focus) is a Tamil word, meaning the interior of the sanctum sanctorum. It is the innermost sanctum and the main focus of a temple where resides one image of the primary deity, Shiva represented by a big stone linga. Only the priests can enter the inner-most chamber. 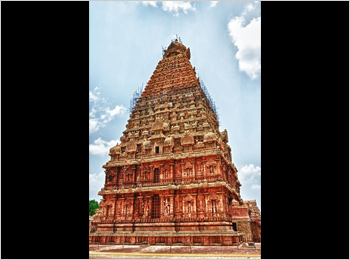 The main deity of the Brihadeeswarar Temple is Lord Shiva. All other deities are placed on the outer wall, like Dakshinamurthy, Chandra and Surya. This temple is one of those rare ones with statues of “Ashtadikpaalakas” or Guardians of directions, such as Indra, Agni, Nirrti, Varuna, Kubera, Isana, Yama and Vayu, each of whom is represented by a life-sized statue. These are enshrined in a separate temple each, facing their respective directions. Only Agni, Vayu, Isana and Varuna are preserved in situ. 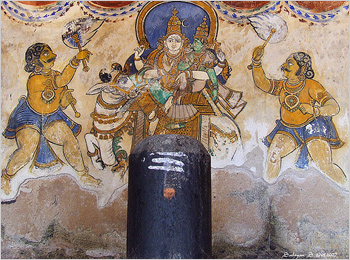 Arulmozhivarman, a Tamil emperor who was popularly known as Raja Raja Chola I laid the foundations for the Brihadeeswarar Temple during 1002 CE. It was the first among other great building projects initiated by the Chola emperor. This temple was built to comply with a divine command received by Raja Raja Chola in a dream.A symmetrical and axial geometry rules the layout of this temple. Temples from this period and the two following centuries are expressions of Chola power, artistic expertise and wealth. Emergence of features such as multifaceted columns along with projecting signals of square capitals signifies the arrival of the Chola style. The Brihadeeswarar Temple was built like a royal temple and is a reflection of the emperor's vision. This temple was the primary site of royal ceremonie such as anointing a new emperor and to link the emperor with Lord Shiva, the deity, the deity's rituals mirrored those of the King's.An architectural exemplar, the Brihadeeswarar Temple showcases the true form of Dravida temple architecture and testifies to the Chola's brilliant achievements in architecture, painting, bronze casting and sculpture. The Brihadeeswarar Temple is the first among all buildings which make use of granite fully and was finished within five years from 1004 CE to 1009 CE.

People here treat Day of Ruling star or satabhishag as festival day in every month during a year, as it symbolizes a ruling star when Raja Raja was born. In month of May, here an annual festival took place for nine days. On this day devotees offer bath to deity with Champaka flower fragrance soaked water.

A visit to this sanctuary has political ruinous inferences that have been seen many times through various events that have happened. The main bad influence has been linked to King Rajaraja. The other bad sway was also seen on former Prime Minister of India Mrs. Indira Gandhi in 1984 when she was killed by her bodyguards in month of October and another bad event happened was when M G Ramachandran, Tamil Nadu Chief Minister had an ill fate stroke in the same year. Karunanidhi during his visit to temple after the fire accident made entry through side entrance of temple but yet denied his belief on taboo that has been spread about temple visit by the politicians and mentioned that it was just the process followed by police officials for security reasons. His exit was also planned from same pathway. He mentioned rather he has increased his political importance after his visit to temple.

Interesting Facts About the Brihadeeshwara Temple of Tanjore

A study in history is certainly incomplete without a mention of the Tanjore Brihadeeshwara Temple or the Tanjore Periya Kovil (Big Temple). This was built by Raja Raja Cholan and his sister Kundavai, who are great devotees of Lord Shiva. It was constructed by the King at the height of the Chola reign to signify his power and strength. Here are a few facts not known about this Chola temple of Thanjavur:

a) The original name of the deity was Rajarajeshwar. It was the Marathas who gave it the name Brihadeeshwara or the Great Ishwara.
b) The main temple is entirely built of granite. More than 130,000 tons of granite is said to have been used to build it.
c) A long associated myth with this temple is that the shadow of the main structure does not fall on the ground. However, this has been proven wrong by scientists.
d) The statue of Nandi at the entrance of the temple is carved out of a single stone.
e) The main Vimanam, which is at about 200 feet is often called Dakshin Meru or Southern Meru.
f) The inspiration to build the temple came to Raja Raja Cholan during his visit to Sri Lanka and is a result of a dream he had.
g) The temple has a portrait of Raja Raja Cholan paying obeisance to Lord Natarajar. This is undoubtedly, the first ever instance of a royal portrait.
h) Inscriptions in the temple point towards Kunjara Mallan Raja Raja Perunthachan as the chief architect of the temple. His successors survive to this day and practice the art of Vastu or Vastu Shastra.
i) Depictions of nartakis or dancers showing eighty one of hundred and eight karanas (synchronised movements of hands and feet) in Bharata Natyam are carved here. These karanas are a part of karanas mentioned in the Natya Shastra of Bharata Muni or Sage Bharata. There is also evidence that the temple was a platform for talented dancers to showcase their talent. These depictions are first of their kind.
j) The inscriptions also mention the different kinds of jewels used in the period. Each of these jewels are mentioned in detail. A total of twenty three different types of pearls, eleven varieties of diamonds and rubies are mentioned in these inscriptions.

What astounds historians is that there was not a single granite quarry in about 100 km radius of the temple. This means that transporting these stones would have been a herculean task. But Raja Raja Cholan insisted on the use of these stones. All of these features make this Chola temple of Tanjore, a magnum opus of the Chola reign.

Thanjavur experiences both pleasant and hot climates. Here during the summer i.e., from month of March to month of May, climate remains very hot with temperature varying from 25 to 40°C. Hence, tourists come this months to visit this place. From June till September, the city experiences Monsoon season. Later low rains accompany this period. This place looks beautiful during this season, offering some relief out of hot climate. Here winter season takes place during the period December to February. At this season, climate remains cool and temperature varies between 20 to 30°C. The best time to visit Thanjavur is from October till March.

From June till September, the climate here remains humid but pleasant due to moderate temperature. This time is suitable to take short trips along with sightseeing. Time between October and March is perfect and ideal for visits by tourists and to temples.

Nearby places to visit

Palace buildings constructed partially by Nayaks and Marathas, the Saraswathi Mahal, an art gallery inside the palace building and the Sangitha Mahal are a few nearby attractions that you can visit.

Devotees pray to Mother Durga for marriage, child boons, promotion in jobs and for transfers to a place of choice by offering archanas. Realizing their wish, devotees offer 25 meter long dhoti with a 14 ft. garland to Lord and 9 yards Sari to mother.

The airport closest to the important city of Thanjavur is located at a distance of about 65 km towards the east of Tiruchi. Thanjavur has a railway junction of its own, which helps the tourists to communicate between Thanjavur and many other prominent regions of the state of Tamil Nadu as well as the rest of the country.