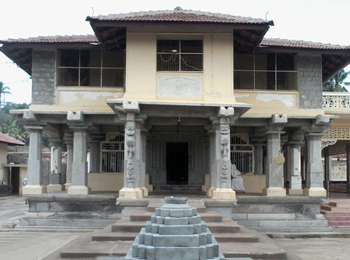 Humcha is a small village located in Shimoga district in Karnataka. It is famous for being home to an ancient temple of Goddess Padmavati, and to the Humbaj Matha (seminary/monastery), an important institution of the Jain community. This temple is considered to be very holy and is known for its cultural and historical heritage. Other notable highlights of the place are a lake that reputedly never dries up and a tree that likewise always remains green. Jain devotees of this holy place are everywhere throughout India and also in foreign countries. Thousands of devotees come to the Humbaj every year for fulfillment of their desires.

According to history, King Jinadattaraya came from Mathura. He planned to construct his kingdom and make that place his capital. While he was travelling back from Mathura, he brought the image of Padmavathi Devi. After a long travel he reached Humcha. He took rest under the shadow of lakki tree. In his dream, he was instructed to build his kingdom in that place. Goddess Shri Padmavathi created two pearls at the pond. A person found the pearls and gave it to the king. The King made two nose rings by using those pearls. This pond is called as Muttina Kere. The king gave one nose ring to his wife and the other one is dedicated to the goddess.

How To Reach Shimoga

Shimoga has its own Domestic Airport roughly 10 min. drive from city. It is well connected to New Delhi and Mumbai via Jet Airways, Air India and Spice Jet. The nearest International Airport is Mangalore Airport roughly 195 Kms from Shimoga city. Frequent Flights to various national and international destinations such as Hyderabad, Abu Dhabi, Bahrain, Kozhikode, Bangalore, and Chennai take off from here.

Shimoga has its own Railway Station named as Shimoga Nagar Railway Station which is connected to the major cities of Karnataka and other state like Mangalore, Hampi, Bangalore, Pune and Mumbai.

Shimoga is associated by road to all cities around it. From Bangalore, one can head to the NH 4 towards Yeshwantpur and Nelamangala to travel to Shimoga by car. On the road to Tumkur, take the NH 206 that goes through Gubbi. Keep on the NH 206 where one could easily reach Shimoga. There are also various Shimoga car rentals that offer comfortable service for a luxurious Shimoga travel.