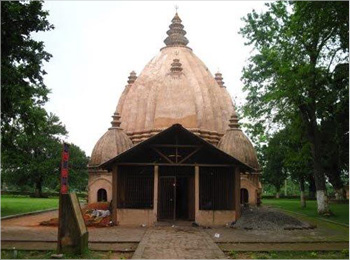 The Negeriting Shiva Dhoul is a Shiva temple in Dergaon, Assam. Situated on a hillock at about one and half kilometres north from the NH 37 in the Golagat district of Assam, the temple was first constructed by the Kacharis during 8th to 9th century AD. Later due to natural calamities it was destroyed. In 1687, it was re-constructed by the Ahom king, Swargadeo Rajeshwar Singha. The famous architect assigned to the job was Ghanshyam Khonikar.

This is the simply designed temple and in close surrounding, there are four other temples. Main deities of these temples are Vishnu, Ganesha, Surya and Durga. A Shiva ling is established in the central portion of this temple and is of approximately 3 metres in diameter. This temple is famous for various Shiva ling as the same were told to be collected by a sage called Urba. The entrance of this temple is generally not huge. Only at one portion, the architectural mixture is seen and that is the Garbhalaya of the temple. Exteriors are of Rajputh style of construction and interior decorations are like Dravidian style. A 7 ft high base is also established there as a symbol of Shiva ling. This temple is the habitat of Rhesus monkeys.

As per the historical records, the stones employed for building the temple were gathered from banks of the Dihing River. The temple remains were discovered from the Gajapanemara forest. Later during 1439, another Ahom king Susenphaa built the shrine on the former remains and installed the Shiva lingam there. However, when Dihing River changed its course, again the temple was destroyed. Much later a devotee of discovered the ruins of the temple and the Shiva lingam. The place is currently referred to as Sheetal Negheri. The Ahom king Rajeshwar Singha then finally recovered the lingam from the river and reconstructed the present temple and re-established the lingam.

The most important festival celebrated in this temple is Mahashivaratri. On this day, thousands of people come to offer fruits, flowers and bel leaves on the Shiva lingam.

Golagat is the nearest railway station.

This temple is easily reachable by roads as NH 37 is 1.5 kilometres away from this temple near Dergaon.