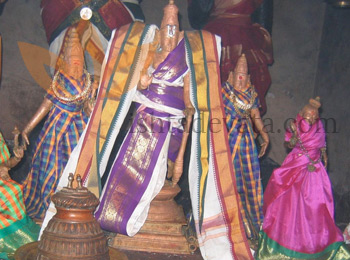 This temple lies in the Tanjore district of Tamil Nadu. First, we have to travel to Aakur from Mayavaram, and then it's about 2 miles away in the route towards Seerkazhi. It's 7 Kilometres away from Kaviripoompatinam. Has no proper arrangements for stay.Sri Naan Madhiya Perumal Temple, Mayavaram is one of the 108 Divya Desa temples, located near Mayiladuthurai (Maayavaram) in Thalaichangadu, a village in Thiruvarur district of Tamil Nadu. It is about 3 kilometres from Aakur, which is about 17 Kilometres from Mayavaram which is on the Mayavaram-Aakur-Nagappattinam route. Located near Seerkazhi (12 kilometres to the east), off the entrance to Poompuhar, on the Nagapattinam Route in Tamil Nadu, is the temple to Sri Naan Madhiya Perumal. This sacred place is one of the 108 Vaisnava Divya Desams and is located in the Chozha Nadu region. The temple is close enough to Mayavaram (c. 16-20 kilometres). Locally, the place is known as Thalachangadu. The main deity, Moolavar, in the temple is, of course, Sri Naan Madhiya Perumal, and the deity brought out for worship outside the sanctum sanctorum, the Urchavar, or the Utsavar, is Sri Vensudhar Perumal or Vyomajoyipiran. Similarly, the Thayar, or Amman (= the aspect of Mahalakshmi as consort to Shri Vishnu), at the temple is Sree Thalaichanga Nachiar and the Utsava Thayar is Sree Sengamalavalli. There is also an exquisite depiction of the goddess Sree Andal in the temple. The Lord of this Divyadesa temple is praised in the Mangalasasanam hymn of Tirumangai Azhwar. Devotees perform Tirumanjanam to Lord and Mother with archanas with Tulsi leaves. Vaikunda ekadasi is the famous festival celebrated here.Since ancient times, this sacred divya desam temple located in the current Nagapattinam district, Tamil Nadu, has been known as the Thalaichanga Nanmathiyam Temple, and thereby the name of the place, Thalachangadu. The known history is for at least 1000 years with links to the Sri Ranganatha temple at Srirangam and Thiru Indalur temple. Rulers like Para Kesari Varma, Raja Raja Chola and Rajendra Chola were closely linked to this temple. However, the story of Chandra (= the moon), getting protection at the sacred pond, theertham, is much older. And thereby, the theertham is known by the story, and recognised as the Chandra theertham. 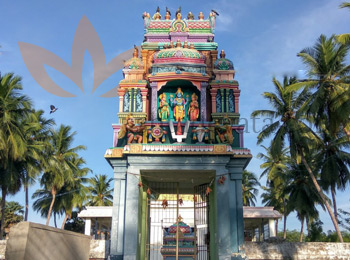 Constructed in Dravidian style of the temple is celebrated in the Divya early medieval Tamil ordinance of the Azhwar holy people from the 6th–9th hundreds of years AD. It is considered as one as a real part of the 108 Divya Desams committed to Vishnu. Vishnu is Soundararaja Perumal and his consort Lakshmi as Soundaravalli. The temple is accepted to be of noteworthy relic and is accepted to be started by the Medieval Cholas of the late eighth century AD, with later commitments at diverse times from Thanjavur Nayaks. The temple has two engravings dating from the Chola period. The temple has a five-layered rajagopuram (passage tower) and revered inside of a rock divider. The complex contains every one of the sanctuaries and water bodies connected with it. The primary passage of the temple confronts the East and at the temple's passageway, there is a four pillared open corridor. The temple has a tall rajagopuram (temple tower) and is encased by rectangular dividers around it. There is a littler temple tower on the western side. The temple's dividers is encompassed by expansive boulevards, through which the temple chariot goes along amid celebrations. The Southern road suits the temple's station chariot and Sarapushkarani, the temple tank. An uncommon picture of Narasimha with eight hands with one gift , the other indicating Abhaya Mudra and the others included in the murdering of devil Hiranya is available in the temple. There is a four-pillared corridor before the hallowed place of Soundarvalli temple that has wonderful architecutural representation. The lobby has the draftsmen's pictures who outlined it. The Nayaka corridor is fabricated like a chariot with wheels outside it. The lobby which has access to the temple has two eight foot models of the watchman divinities Sumba and Nigumba. 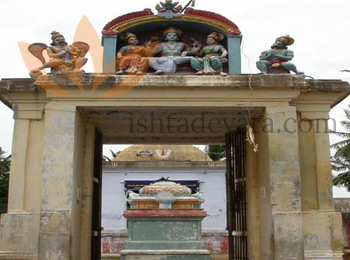 There are two stories that mention about the birth of Chandra. In the great churning of the oceans between the devas and the asuras, Chandra is born after Sree Mahalakshmi, and is known as her elder brother. Later, in Hindu astrology, Chandra or Moon, is placed second to the Surya, or Sun. The other story is that Chandra was born to the Maharshi Athiri and his wife, Anusuya. The temple is known from the story of the liberation of Chandra from the curse cast upon him. Chandra was a disciple of the great teacher of the gods, Brihaspati. During those times, it is said that Chandra attempted to woo Tara, Brihaspati's second wife. Tara, fell in love with Chandra who looked exceedingly beautiful. Tara deserted Brihaspati and started living with Chandra. Insulted, Brihaspati, the teacher of the gods, asked Tara to return, and she refused.

Not able to take this insult, Brihaspati called upon the support of the devas to war against Chandra. Knowing this to be an appropriate opportunity, the great teacher of the asuras, Sukracharya, decided to give support Chandra. The battle between the devas and the asuras, on behalf of Brihaspati and Chandra, is known as the Tarakaamayam. Being aware that if this war would be fought for a long period of time, it could destroy the world as it was then, Brahma intervened and stopped the battle. Upon Brahma's advice and guidance, Tara left Chandra and went back to Brihaspati. Later, she gave birth to a beautiful lad, Budha, known to us as Mercury, or the Planet Budha, in Hindu astrology. A new argument began, and both Brihaspati and Chandra claimed that they were the father. Wanting to know the truth, Budha asked Tara, and she replied that Chandra was the father.

Chandra requested two of his wives, Rohini and Krittika, daughters of Daksha, to take care of Budha during his childhood. Later, on knowing the truth about his birth, Budha left his home and travelled to the Himalayas to meditate upon Vishnu. One version of the story is that the angry Brihaspati cursed Chandra with a disease-ridden and ugly body. One story depicts the disease as leprosy. Another story is that Daksha Prajapati, father of many daughters, had given them in marriage to Chandra in appreciation of his beautiful body and handsome looks. However, Chandra remained in love only with Rohini and was not respectful of the others. This made Daksha Prajapati very angry with Chandra and decided to punish his arrogance with the curse that he would lose his beautiful body and handsome looks.

Chandra sought help from Vishnu for liberation from the curse. Vishnu instructed Chandra about the tremendous effort that he would have to undertake in order to regain his wonderful looks. Accordingly, Chandra bathed and presented all the sacred tasks (= kainkaryam) at Srirangam for nearly fifteen years and got to be liberated from the curse. Subsequently, Chandra travelled to Thiru Indalur and presented his worship to Sri Parimala Rangan, and was able to get his sins reduced. The place later came to be known as Indhunna and this is a name that is recognised to denote Chandra. Therefore, the place began to be known as Chandra Kshetra. Subsequently and finally, Chandra came to the Thalaichangadu Kshetram, bathed in the temple pond and began his penance in worship to Vishnu.

Of the 108 Divya Desas of Perumal, Thalachangadu positions 25. Those confronting unfavorable parts of planet Moon are encouraged to result in these present circumstances temple and love Lord and Mother for help.The Lord, along with Sree Mahalakshmi, arrived at the place in the Chandra Vimaanam (= the aerial craft of Vishnu and Mahalakshmi). In appreciation of Chandra's devotion, Vishnu liberated him of all his curses. Therefore, this place came to be known as Chandra Saabhaharan. The belief is that if one bathes at the temples of Srirangam, Thiru Indalur and Thalaichangadu, one could be cured of leprosy. In gratitude, and in order to share the blessings, Chandra requested Vishnu to continue to reside at the place, and receive his devotees at the temple. Therefore, this temple came to be known as Sri Naan Madhiya Perumal. The great saint-poet, Thirumangai Alwar, in his compositions, one among them, the Siriya Thiru Madal, referred to the sacred waters of the temple pond, in praise, and said Mannum mani mada koil, manaalana nanneer, Thalai changa naan madiyanaai. It is said that the sacred waters of the temple pond does taste differently here. In a unique aspect, Vishnu and Shiva are depicted together in diverse aspects. While Perumal appears with the crescent moon on his head, it is Shiva who is facing east and is standing.

Those facing adverse aspects of planet Moon are advised to come to this temple and worship Lord and Mother for relief. Devotees perform Tirumanjanam to Lord and Mother with archanas with Tulsi leaves.

Thalaichangadu is 15 km from Sirkali on the Karaikal road. The temple is 2 km far from the bus stop. The nearest railway station is in Sirkali. The closest airports are in Trichy and Chennai.