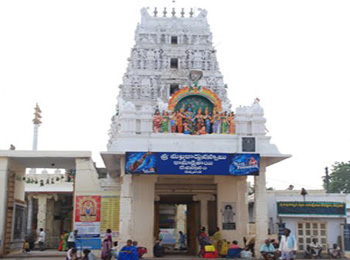 The temple of Lord Mallikarjuna is situated on Nallamalai Hills, Srisailam is presumed to be a standout amongst the most antiquated kshetras in India. It is on the right half of the River Krishna in Kurnool District of Andhra Pradesh. This praised mountain is additionally named as Siridhan, Srigiri, Sirigiri, Sriparvatha and Srinagam. It has been a well known focal point of Saivite journey for centuries. The unmistakable quality of this Divya Kshetram is highlighted by the way that while performing our everyday family customs we determine spot of area of our presence with reference to Srisailam. The Lord of the temple is praised by Saivite Saints Gnanasambandar, Appar and Sundarar in their Thevaram hymns.

This is the only the temple in north praised in Thevaram hymns. Sri Shailam in Andhra Pradesh is one among the 12 Jyothilinga Sthalas. If Mount Kailash is the capital of Shiva sthalas, Sri Shailam occupies the second place. The holy land is third in rank among the 51 Shakti Peetas of Mother Uma. It is said that the benefits of offering lakhs of alms-Dhans at Kurukshetra, bathing 2000 times in holy Ganga, performing penance on the banks of Narmada, living thousand years in Kasi can be derived by worshipping Lord Mallikarjuna once in life time, declares Skanda Maha Purana. The hill is but Nandhi Himself on whom Lord Shiva is seated and ruling. It is in this place Nandhi became the vahan of Lord Shiva. It is very beautiful. While the Shiva shrine is at a lower level, Mother Pramarambal shrine is up by 30 steps.

The statue of devotee Mallamma shedding Bhakti tears is so realistic that no visitor can afford to miss. There is a mutt here where Pandavas are said to have stayed. The foot prints of Bheema are carved on a rock. As Lord Shiva stood here with His trident, this is placed on the Vimana of Lord Mallikarjuna.Srisailam played a dominant role in our religious, cultural and social history from ancient times. The epigraphical evidence reveals that the history of Srisailam begins with the Sathavahanas who were the first empire builders in South India. The earliest known historical mention of the Hill - Srisailam, can be traced in Pulumavis Nasik inscription of 1st Century A.D. The Sathavahanas, the Ikshavakus, the Pallavas, the Vishnukundis, the Chalukyas, the Kakatiyas, the Reedy Kings, the Vijayanagara Emperors and Chatrapathi Shivaji are among the famous emperors who worshipped God Mallikarjuna Swamy.

Prataparudra of Kakatiya Dynasty strived a considerable measure for the enhancements of this Kshetram and allowed Paraganas for its upkeep. Ganapathideva has burned through 12000 Golden Nanyas for the temple's upkeep. The time of Reddi Kings is the Golden Age of Srisailam that all leaders of the administration did praised administration for this temple. In fourteenth Century Prolaya Vema Reddi of Reddy Dynasty built ventured way approach to Srisailam and Pathalaganga (Here the waterway Krishna is called as Pathalaganga) and Anavema Reddi developed Veera Siromandapam in which the Veerasaiva devotees remove their hands, tongue, appendages with commitment to achieve the God's acknowledgment. This practice is known as Veeracharam.The Second Harihararaya of Vijayanagara Empire developed the Mukhamantapam of Swamy place of worship furthermore a Gopuram on Southern Side of the temple. In the fifteenth Century Sri Krishnadevaraya Constructed the Rajagopuram on Eastern side and Salumantapas on both sides of the temple. chatrapathi-sivaji.The last Hindu King who endeavored hard for the temple's change is Chatrapathi Shivaji who built a Gopuram on northern side in the year 1667 A.D. 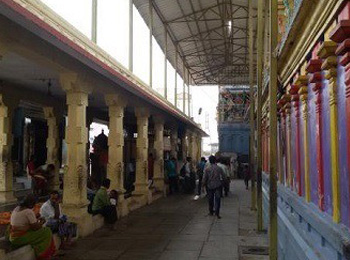 The temple is at the top of the hill facing east with Gopurams-towers on four sides. The main entrance is at eastern gopuram. There is a Nandhi made of stone in front hall at the entrance. Lord Siddhi Vinayaka blesses the devotees at the entrance. There are six temples said to have been built by Pandavas. There is also a temple built in marbles for Lord Shanmuga. Temples of Mother Rajarajeswari, Mother Annapoorani, Lord Sahasralingeswarar and Pancha Nadeeswaram are of spiritual importance. The South Tower is called Ranga Mandapam. The marriage hall-kalyana mandapam is at the east entrance. Mechanized boats are available to visit Nagarjuna dam. There are chatrams for the convenience of the devotee. The temple is 3 km upward from the foot of the hills. As the temple is in a dense forest region, private vehicles are prohibited from 8.00 p.m. to 6.00 a.m next morning. Only Government buses are allowed. The devotee crowd is huge on Mondays and Fridays. 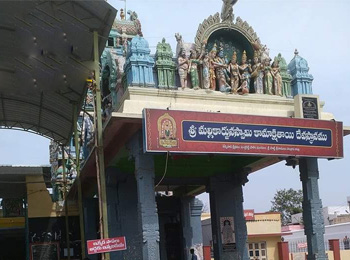 The hallowed place of Lord Mallikarjuna beautifully arranged on a level top of Nallamalai Hills, Srisailam is presumed to be a standout amongst the most antiquated kshetras in India. It is on the right half of the River Krishna in Kurnool District of Andhra Pradesh. This commended mountain is likewise named as Siridhan, Srigiri, Sirigiri, Sriparvatha and Srinagam. It has been a mainstream focus of Saivite journey for a considerable length of time.The conspicuousness of this Divya Kshetram is highlighted by the way that while performing our every day family unit customs we determine spot of area of our presence with reference to Srisailam.The managing Deities of this kshetram Lord Mallikarjuna Swamy is one of the twelve Jyothirlingas and Goddess Bhramaramba Devi is one of the eighteen Mahasakthis and both are self-showed. The extraordinary component of this kshetram is the blend of Jyothirlingam and Mahasakthi in one grounds, which is exceptionally uncommon and stand out of its kind.There is a typical faith in vogue that this Holy Kshetram exists from times immemorial. The artifact and beginning of God Mallikarjuna Swamy and Goddess Bhramaramba Devi is not known. The Mallikarjuna Linga is open to every single enthusiast and anyone can go into the sanctum sanctorum of Mallikarjuna, touch him and perform Abhishekam and Archana himself to recitation of Mantras by Archakas without station or statement of faith or religion. This plainly uncovers that communist example of society began from this spot and it is still in presence. 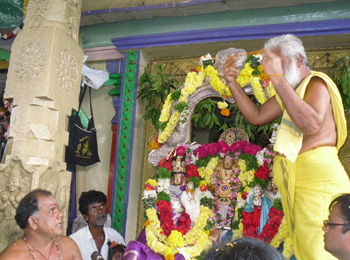 Siladha performed serious atonement on Lord Shiva looking for a help to have youngsters. Two children were destined to him, Nandhi and Parvathan. Sanakadhi Rishi approached the savvy and said that Nandhi would live on earth just for a brief timeframe pain. Nandhi guaranteed his dad by saying that he would win over death by his atonement on Lord Shiva. Pleased with his penance, Lord Shiva appeared and made him His vahan and also passed the request that aficionados ought to come to Him strictly when being permitted by Nandhi. Nandhi’s place of penance is at the foot of the hills known as Nandiyal. His brother also performed penance of Lord and became a hill – Parvatha Hill – Parvatha Malai in Tamil. Chandra Gupta was the ruler of Mallikapuri region. His daughter Chandrarekha, a Shiva devotee was worshipping Lord with jasmine and Arjuna flowers available in the region, hence the name Mallikarjuna of Lord here. It is the faith of the Hindus that worshipping Nandhi Bhagwan during the Pradosha days even in small temples promises their wishes, the benefit of doing so at Srishailam, the very birth place of Nandhi is certainly manifold promising total salvation. 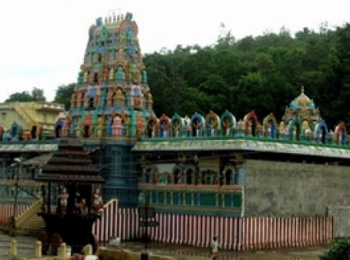 The important annual festivals celebrated in the temple are Mahasivaratri Brahmothsavams. The Mahasivarathri Utsavams are being celebrated as Brahmothsavams in the month of Magham (the 11th month of Indian Lunar Calendar) which falls usually in the month of February/March. This is a festival of seven days with Panchahnika Deeksha. The Mahasivarathri day (29th day of Magham) is the most important day of the festival, the most vital day of the celebration. The critical occasions of the festivals are Ankurarpana, Dhwajarohana, Vahana Sevas to God and Goddess, Lingodhbhavakala Maharudrabhishekam to God, Pagalankarana, Kalyanothsavam, Radhothsavam and Dhwajavarohana. Ugadi festivities performed for a time of five days. The celebration starts three days before the Ugadi day i.e., Telugu New Year’s day (Chaitra Suddha Padyami) which by and large falls in March to April. More than Three Lakhs of travelers especially from Karnataka and Maharastra States are going by the temple amid these utsavams. Devi Sarannavaratrulu is a celebration of nine days starting from the first day of Asweejam month (the seventh month of Indian Lunar Calendar) which for the most part falls in September or October. The critical occasions of this utsavam are performing of Chandiyagam, Rudrayagam, Navadurga alankaras to Goddess and Vahana Sevas to God and Goddess other than a few unique poojas. Goddess Bhramaramba Devi is for the most part worshiped in these utsavams.

Lord Shiva is a swayambumurthi. This is the sole Shiva Temple in Andhra Pradesh, and is the birth place of Bhagwan Nandhi. This is the only Shiva temple in Andhra Pradesh that is praised in the Thevaram hymns. Srisailam is one among the 12 Jyothirlinga Sthalas of Lord Shiva. People approach this temple with prayers to realize their wishes, and perform wedding festivals for the Lord and Mother. Devotees perform abhishekas to Lord and Mother and offer vastras.

The nearest airport is the Rajiv Gandhi International Airport at Hyderabad which is well connected to all major cities on the country like Delhi, Bangalore, Mumbai, Chennai, Kolkata, Ahmedabad, Kozhikode etc.

The nearest railway station to reach Srisailam is the Markapur Railway Station which is a one-and-a-half hour drive away. Markapur station is well connected to all major cities of Andhra Pradesh and other cities of India.

Srisailam is most easily accessible by road. Buses connect Srisailam with Hyderabad, Kurnool, Guntur and other towns of Andhra Pradesh.