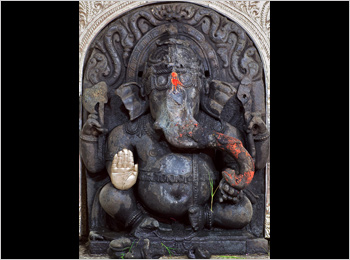 
The Shirali Maha Ganapathi Mahammaya Temple is the Kuladevata Temple (family temple) to the Prabhus, Joishys, Bhats, Kamaths, Puraniks, Mallyas, Kudvas, Nayaks of the Goud Saraswat community. The temple is situated at Shirali in the Uttar Kannada district of the state of Karnataka. H.H.Shrimat Bhuvanendra Tirth Swamiji of Shri Kashi Math Samsthan did the pratishtha of Utsava Murti in the year 1884. 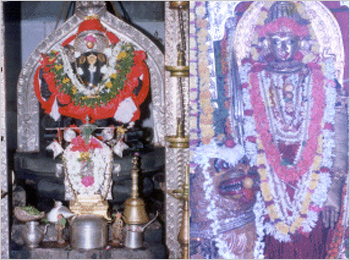 The Shirali Mahaganapathi Mahamaya Temple is one of the early temples located in the southern part of the Bhatkal taluk of North Kanara.The Temple is the Kuladevata Temple (family temple) to the Prabhus, Joishys, Bhats, Kamaths, Puraniks, Mallyas, Kudvas, Nayaks of the Goud Saraswat community. The temple is located at Shirali in the Uttar Kannada district of Karnataka state. It is about five-minute drive from Bhatkal. Temple. It is believed to be around 400 years old. It was renovated in 1904. 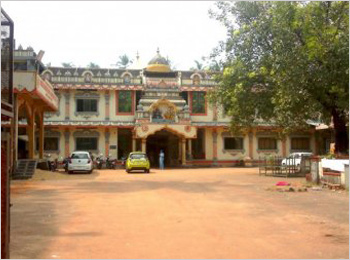 The temple was established by devotees who migrated from Goa about 400–500 years ago. The presiding deities are Shri Mahaganapati (Vinayaka) and Shri Mahamaya .

The deities were moved from Ella in Goa to nearby Golthi and Naveli. Golthi / Goltim and Naveli / Navelim are located in Divar Island, Tiswadi Taluka of Goa. On account of the hostile religious dogmas pursued by the Portuguese rulers around 1560, the devotees were forced to leave Goa. The devotees were not in a position to take the idols with them. They invoked the ‘saanidhya’ or the sacred presence of the deities in the silver trunk of Lord Ganesha and the mask of goddess Mahamaya. When they arrved at Bhatkal they were not able to build a temple straightaway, hence were forced to keep these two symbols in a shop belonging to a devotee. Later on they built a temple in Shirali, a few miles north of Bhatkal, where it stands to this day. The deities are also known as Pete Vinayaka and Shantadurga as they are located in a "pete", which means a town in Kannada. The temple has a unique darshan seva called, "mali". 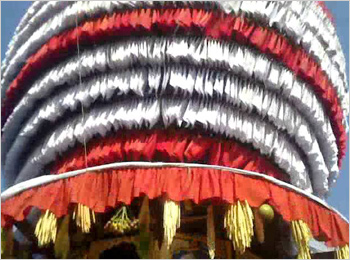 As per to the records with Archaeological Survey of Goa, the idol of Mahaganapati and Mahamaya (also referred as Durgadevi and Shantadurga) were earlier located in Ella - Tiswadi Goa along with Shri Gomanteshwar and the other deities. During the Muslim invasion in Goa (13th century) the shrine in Ella was destroyed and the idols were transferred to Navelim and Goltim. Till early 16th century, the deities were prayed to on the island, following which they were destroyed to by the Portuguese evangelists. The devotees had no choice but to relocate the idols to Khandepar and from there to its final destination Khandola. During the zealous Portuguese missionary acts, many devotees fled Goa and entered Karnataka. Indications of this can still be found today. Along the way towards Karnataka, families that settled in Karwar established a temple in Asnoti. For those who settled in Ankola, the sacred coconut of Shantadurga/ Durgadevi/ Mahamaya found no place at homes and was kept at the local temple to worship. Many years later, the local deity came to be known as Shantadurga. Some families went far ahead from northern Karnataka to the south coast of Bhatkal, where they felt secure and thus, established a temple of Ganesha and Mahamaya. Today, the original 13th-century idol of Ganesha of Ella/Navelim is still worshiped in Khandola. At a distance is the temple of Shantadurga brought from Goltim/Ella. The affiliates are Bhagavati and Ravalnath.

It is roughly estimated that presently the Shirali Maha Ganapathi and Mahammaya temple has 125 Kulavis, with a total of 600 persons. Most Kulavis visit the temple annually, and many Kulavis living abroad visit the temple every time they visit India.


The temple has a large following and is also the 'family temple' of several Konkani families who come to pay their respects after every auspicious occasion in the family such as a wedding, birth of a child etc. or even in times of distress to make vows to the deity and ask for blessings.