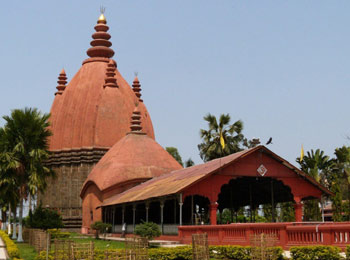 The Sivasagar Sivadol is a group of structures comprising three Hindu temples of Sivadol, Visnudol and Devidol. These temples are located on the banks of the Sivasagar tank. It is also known as the Borpukhuri tank in Assam.

The Sivadol or Shiva temple, built in the Shikhara architecture (more specifically Ahom temple architecture), has a central tower which is said to be the tallest tower in India at a height of 104 feet (32 m). The base of the temple measures 195 ft (59 m) in circumference. The temple is built with stone and bricks. Inside the Garbhagriha (sanctum sanctorium), the Shiva Linga (aniconic symbol of Shiva) is deified, which is in a reverse setting. The Shikhara or Vimana (temple tower), which rises above the sanctum sanatorium, has a four-tiered, 8 feet (2.4 m) mastaka and is crowned by a kalasha made of gold. The tower itself is built with parallel ridges and furrows. The lower part of the tower is flanked by four smaller identical towers, which are known as the angashikaras. The garbagriha, where the main deity is deified in the form of a reversed Shiva linga, is interconnected with an antarala, a small antechamber, which has a roof known as do-chala, which is akin to a typical hut built in Assam. The antarala is also connected to one of the mandapas (outdoor halls). The exterior walls of the temple are embellished with sculptures and floral designs set in Bas-relief. The sixteen armed Durga holding various weapons is a "pan-Himalayan" theme adopted in plastic arts of Ahom temple architecture. Durga is depicted decimating Mahishasura, the demon king with a buffalo head, by thrusting a spear. She is riding a lion, her mount, which supports her in the fight with the demon. This feature represents the harmonious blend of brahminical Hindu culture with the Shaktism cult which the royalty of Ahom dynasty had adopted as their religious practice throughout their kingdom.

Every year, during the Mahashivaratri, a huge mela (fair) is organized in the Shiva temple and pilgrims visit from all parts of India to offer puja. During the Hindu month of Sawan (August September), Hare Krishna kirtan, chanting of the Hare Krishna mantra, is conducted all through the night, a major attraction to the devotees.