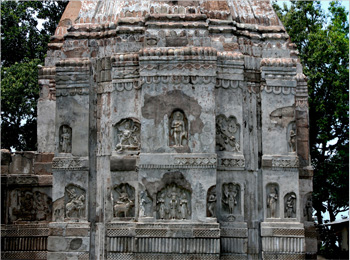 The Hayagriva Temple is dedicated to Lord Vishnu and is located in Manikuta Hill, in Assam, India. 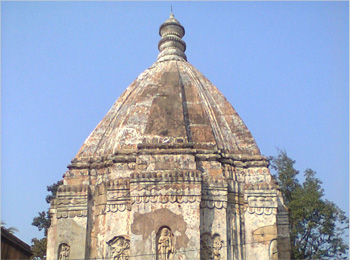 The Hayagriva temple at Hajo in Assam, near Guwahati is an ancient one, and it enshrines Vishnu as Hayagriva (an incarnation of Vishnu in the form of a human being with a horse's head). The hillock on which this temple is housed is known as Manikoota Parvata. Manikoota or Hajo has been a center of worship for both Hindus and Buddhists. While Buddhists regard the image of worship as that of Buddha, the Hindus regard it as that of Vishnu as Narasimha. The present structure of the temple dates back to the period of King Raghudeva Narayana of the 16th century CE. The original temple that existed here was destroyed by Kalapahar who also destroyed the Kamakhya temple nearby.

The entire Hayagriva Madhava Temple is divided into three parts the basement, the center and the Sikhara. The Sikhara has a pyramid like structure, which continues right up to an apex point. This entire structure rests over enormous brick pillars and is considered as an addition to the original structure of the temple, possibly constructed by the Koch king of the 15th era, King Naranarayan. There is a huge entrance hall made of bricks and measuring about 40 feet by 20 feet. A flight of stone steps leads you into the 14 sq ft Garbhagriha, which contains image of the residing deity and its podium. The entrance to this shrine is made of four blocks of granite and is about 10 feet high and 5 feet wide. This opens into an anteroom, made of stone and about 10 feet by 10 feet. Two stone screens, cut in the form of lotus flowers, lay on either side of the room with apertures for the entry of light and air. The exterior of the temple has huge sculptured figures, representing the 10 Avataras, with Buddha as the ninth. Hayagriva Temple was initially demolished by Kalapahar and rebuilt by the Koch King Raghudev in 1543. Just close to this temple, a smaller temple was constructed by the Ahom King Pramatta Singh, where Doul (or Holi) is celebrated on a large scale every year. 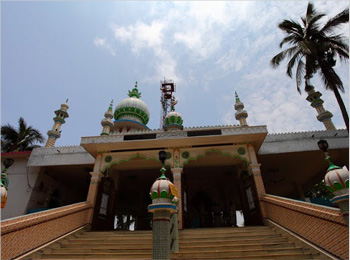 Legend has it that during the process of creation, the demons Madhu and Kaitabha stole the Vedas from Brahma and Vishnu took the Hayagriva form to recover the Vedas from the demons. Another legend has it that during the process of creation, Vishnu compiled the Vedas in the Hayagriva form and that the Hayagriva Avatara precedes the Matsya Avatara wherein he recovered the stolen Vedas from the demons Madhu and Kaitabha.Hayagriva Madhava Temple is situated on the Monikut hill. The hill is situated in Hajo of Assam which is around 30 kilometre to west of Guwahati.The present temple structure was constructed by the King Raghudeva Narayan in 1583.According to some historians the King of Pala dynasty constructed it in 6th century. It is a stone temple and it enshrines an image of Hayagriva Madhava. Some Buddhists believe that the Hayagriva Mahhava temple, best known in the group of Hindu temples, is where the Buddha attained Nirvana. At this imposing temple, the presiding deity is worshipped as the Man Lion incarnation of Vishnu by the Hindus. It is a stone temple and it enshrines an image of Hayagriva Madhav. The rows of elephants are seen on the body of the temple and they are fine specimens of Assamese art. There is a big pond known as Madhab Pukhuri near the temple. Moreover this temple preaches both Hinduism and Buddhism, which attract Buddhist Monks from far flung places. Sayani, the first wife of Kalia Bhomora Borphukan donated a family of paiks and also a plot of land for their maintenance to the Hayagriva Madhava temple during the reign of Ahom king Kamaleswar Singha.Around 30 kilometre to west of Guwahati, in the town of Hajo, is situated one of the most sacred pilgrimage spot in Assam Hayagriva Madhava Temple. Highly revered by the Hindus as well as the Buddhists, the temple enshrines an image of Lord Vishnu, which resembles the image of Lord Jagannath at Puri (Orissa). The temple is also considered as a major pilgrimage spot by Buddhist Lamas and Bhutiyas who follow Buddhism. They believe that Lord Buddha acquired Nirvana or Moksha in this place and that the image inside the temple is that of the Lord. Hayagriva Madhava Temple, located on a hill called Manikuta, is dedicated to Lord ishnu. Hayagriva (Vishnu with a horse head) is one of the incarnations of Lord Vishnu.

Legend has it that once, two demons, Madhu and Kaitabha, took away the Vedas from Lord Brahma, while He was on the lotus. Upset and offended by this, Brahma awoke Lord Vishnu while He was sleeping and requested for the recovery of the Vedas. It was then that the Lord assumed the form of Hayagriva, went to Rasatala (where the demons had kept the Vedas), recovered them and gave them back to Brahma. After recovering the Vedas, Lord Vishnu went to the north east corner of the great sea and slept in His Hayagriva form. While he was sleeping, the demons came back and challenged the Lord to a fight. A big war commenced and the demons were finally killed by the Lord. According to another legend, Hayagriva was the name of the demon that stole the Vedas from Brahma and was finally killed by Vishnu. However, the first legends find much more popularity than the latter.

The nearest airport is Guwahati.

The nearest railhead is situated at Guwahati.

Guwahati is well connected with regular bus services from all the major cities in and around the state.