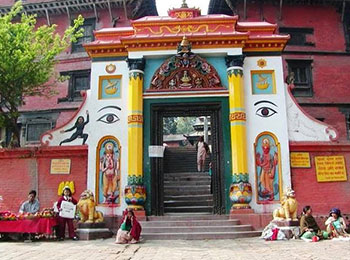 Guhyeshwari Temple, also spelled Guheswari or Guhjeshwari, is one of the most revered, holy temples in Kathmandu, Nepal. This temple is dedicated to Aadi Shakti.The temple is a Shakti Peetha near Pashupatinath Temple. It is said that this temple is the Shakti chair of Pasupanath Temple. It is believed that Devi Sati's corpse's parts fell in different region when Shiva carried it and roamed around the world in sorrow. The Temple of Guhyeshwari lies about 1 km east of Pashupatinath Temple and is located near the banks of the Bagmati River. 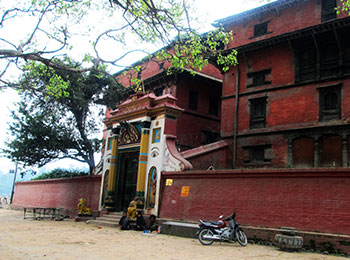 King Pratap Malla built this temple in the 17th century. The Goddess is also called Guhyekali. It is the main temple, dedicated to Guhyeshwari. It is an important pilgrimage destination for Hindus and especially for Tantric worshipers.

The temple is built in Pagoda style of Bhutan and looks delicate. The temple's architecture is simple and beautiful. The chief sanctum is nicely adorned with flower motifs. The name of the temple originates from words "Guhya" (vagina) and "Ishwari" (goddess). The temple symbolizes the harmony between male and female forces of creation. Non-Hindus are not allowed to enter the main sanctum of the temple. 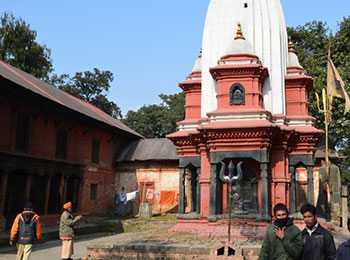 The Vishwasorup of goddess Guheshwori depicts her as a many and different coloured headed goddess with innumerable hands. The temple gets crowded during Dashain and Navaratri. 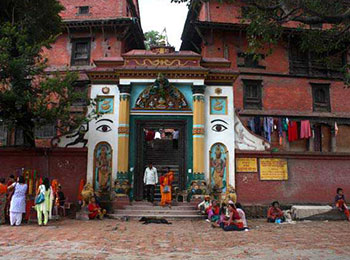 The mythology of Daksha yaga and Sati's self-immolation had immense significance in shaping the ancient Sanskrit literature and even had impact on the culture of India. It led to the development of the concept of Shakti Peethas and there by strengthening Shaktism. Enormous mythological stories in puranas took the Daksha yaga as the reason for its origin.The Guhyeshwari temple, dedicated to Goddess Sati, was built by King Pratap Malla in the 17th century and is considered to be one of the most sacred sites by Hindus. When Shiva was insulted by his father in law, Sati was so angry that she jumped into flames of yagya (fire worship), an event which gave rise to the practice of Sati, or self-sacrifice. Shiva was grief-stricken and picked up her corpse and began to wander about as her body parts fell to the earth. The temple marks the spot where her yoni fell; guhya means vagina and ishwari means goddess. The goddess is worshipped at the centre of the temple in a kalasha (water jar) that is covered with a layer of silver and gold. The temple stands at the centre of a courtyard and is topped with four gilded snakes that support the finial roof. Shakti Peethas are shrines or divine places of the Mother Goddess. These are places that are believed to have enshrined with the presence of Shakti due to the falling of body parts of the corpse of Sati Devi, when Lord Shiva carried it and wandered throughout Aryavartha in sorrow. There are 51 Shakti Peethas corresponding to the 51 letters of the Sanskrit alphabet. Each temple possesses shrines for Shakti and Kalabhairava. The Shakti is Mahashira and the Bhairava is Kapali. This temple is revered by Tantric practitioners and Tantric rituals are performed in this temple. The temple is also mentioned in the Shiva tantra Rahasya, Kali tantra and Chandi tantra as one of the most important places for gaining the power of tantra.

Many believe this to be the temple to go to in order to pray for marital fidelity and a lot of Hindus will make the trip here to ensure that their marriage does not suffer. It is believed that if a marriage takes place in the Guhyeshwari temple, the couples will be soul mates for next 6 births. Women worship in Guhyeshwari Temple to improve health of their husband. Worship done here is blessed with victory over enemies.

Tribhuwan International Airport at Kathmandu is the sole international airport in Nepal. The airport is well equipped to handle international flights of all kinds. The airport has good transit facilities though service is not world class. The officials are co-operative and the immigration process is very simple. Kathmandu has direct or indirect flights from nearly all the major cities in Eurasia and Americas. There are direct flights to Asian cities like Mumbai,Delhi, Islamabad, Karachi,Dhaka, Tokyo, Singapore, Shanghai, Doha, Abu Dhabi and Dubai. Among the European cities, flights are available from Berlin, Paris,Munich, London, Frankfurt, Berne, Amsterdam,Moscow and Vienna. Apart from that, regular flights are available from New York, Los Angeles and Tel Aviv.