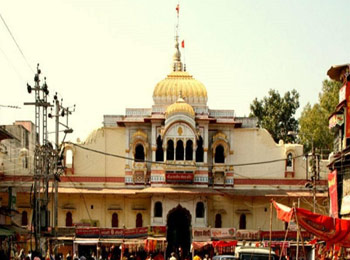 Gopal temple at Ujjain is dedicated to Lord Krishna in blue form. It is also known as Dwarikadhish Temple. Lord Krishna is the lover of milkmaids, the celestial herdsman and the great incarnation of Preserver of the Universe-God Vishnu.

Gopal Mandir, Ujjain is a marble-spired structure which is an excellent example of Maratha architecture. The Gopal Mandir in Ujjain in India possesses a two feet tall statue of Lord Krishna. Moulded in silver, the statue is placed on a marble-inlaid altar with silver-plated doors. Mahmud of Ghazni had taken these doors from the famous Somnath Temple in Gujarat and carried them to Ghazni in Afghanistan in 1026 A.D. The door in the inner sanctum is the same door, which had been carried away by Ghazni from the Somnath temple. Mahadji Scindia recovered the door and now it has been installed in this temple. Gopal Mandir was built following the old and traditional styles of building temples and monuments. The temple portrays an ethnic and traditional look. It is definitely a masterpiece and an excellent work of art.

How To Reach Ujjain