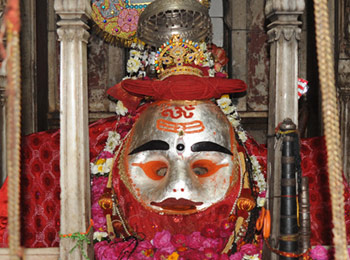 The Kal Bhairav temple is a Hindu temple located in the Ujjain city of Madhya Pradesh, India. It is dedicated to Kal Bhairav, the guardian deity of the city. Located on the banks of the Shipra River, it is one of the most active temples in the city, visited by hundreds of devotees daily. Liquor is one of the offerings made to the temple deity.

As the name suggests, the temple is dedicated to Kal Bhairav (or Kala Bhairava). The deity's image is a face in form of a rock layered with kumkuma or vermilion. The deity's silver head is adorned with a Maratha-style pagri, a tradition dating back to the days of Mahadaji Shinde.The worship of Ashta Bhairava ("eight Bhairavas") is a part of the Saivite tradition, and the Kal Bhairav is considered their chief. The worship of Kal Bhairav was traditionally popular among the Kapalika and Aghora sects, and Ujjain was a prominent centre of these sects. Kal Bhairav is the guardian deity of Ujjain, he is considered Senapati of the town.

The present-day temple structure was built over the remains of an older temple. Images of Shiva, Parvati, Vishnu and Ganesha belonging to the Parmara period (9th-13th century CE) have been recovered from the place. The temple walls were once decorated with Malwa paintings. However, only traces of these paintings are visible now. The original temple is believed to have been built by an obscure king named Bhadrasen. It has been mentioned in the Avanti Khanda of the Skanda Purana. The present-day temple structure shows Maratha influence. According to the local tradition, after the Maratha defeat in the Third Battle of Panipat (1761 CE), the Maratha general Mahadaji Shinde offered his pagri (turban) to the deity, praying for victory in his campaign to restore the Maratha rule in North India. After successfully resurrecting Maratha power, he carried out restoration of the temple.

Maha sivaratri is celebrated as a festival.

How To Reach Kal Bhairav temple