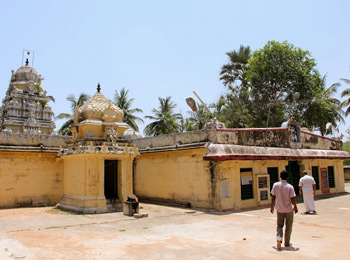 Gnanapureeswarar Temple is a Hindu temple located at Tiruvadishoolam near Chengalpattu in the Kanchipuram district of Tamil Nadu, India. The presiding deity is Shiva.

In days of yore, the region was a jungle dense with Vilwa trees. Of the many cows grazing here, one did not yield sufficient milk as expected. The shepherd observed the cow’s movements and found it pouring its milk among thick bushes. He informed the people of the village. They cleared the bush and found a Maragatha Swayambu Linga. They understood that Ambica was the cow giving the wisdom milk. They built the temple here, naming Lord Gnanapureeswarar and Mother Govardhanambikai. Devotees pray here for good education and wisdom.

Generally, we see Mother Ambica with Her feet close together. Here, Ambica has one foot backward and one forward as if in walking posture.

Lord Shiva once set out to help child saint Tirugnanasambandar who was tired then. When Ambica too joined Him, Lord asked Her to be back as any child would recognize the Mother who fed it. He will easily recognize both. Lord simply wanted to go alone. As Ambica was ready to accompany the Lord, She is seen ready to go walking with Lord, it is described. Those with disfigured legs pray to Ambica.

As per the legend, the main deity of the temple was lying along with other stones in a Dharga in RK Mutt Road. When Arcot Nawab was passing by, his horse was tied to the idol. Immediately, the horse got ill. When it was untied, it got rid of illness. It was ultimately discovered that the stone was the idol of God Ganesha and this temple was built. This small temple also has the idols of Annamalai in the form of Shiv Linga, Unnamalai, Murugan with Valli and Devasena, Durga, Nagattamman, Saneeswara and Navagraha.Saint Tirugnanasambandar, during his pilgrimage to Shiva temples felt terribly hungry and tired while passing through this place. As it was noon time, Sun too was hot. He sat under a tree for rest. A shepherd wearing a loin cloth and holding a small stick came to the place. He offered a pot of curd to Sambandar to quench his hunger and asked him who he was. Sambandar told the shepherd that He was visiting Shiva temples. The boy told the saint that there was Shiva in that place too and compelled him to sing His praise. Sambandar had his own doubt about the shepherd as He was very handsome. Saint followed the boy who stopped near a tank, smiled and disappeared. Lord Shiva granted darshan as a shepherd.

Lord came to the saint on his way and left on the way -Idai in Tamil. Hence, Lord is praised as Idai Suranathar. Sambandar sang Pathigam-10 verses in praise of Lord.

Chitra poornima in April-May; Wedding festival along with Panguni Uthiram in March-April and Bangle festival (Valaikappu) for Mother on Aadi Pooram in July-August are the festivals celebrated in the temple.

How To Reach Gnanapureeswarar Temple