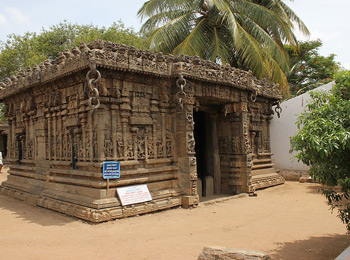 The Gaurishwara Temple was built in the Dravidian style, though it does not have the distinctive Gopura or entrance tower that marks this style. The temple also has beautiful carvings on pillars and walls depicting scenes from mythology. There are carvings of Andhakasuravadha, figures of Narasimha, Sarabha, Dhakshinamurthy, Vali, Sugriva and Kalinga Mardhana Krishna.

It also has the beautiful Stone Chains that mark the Chola temples of this region. Beautiful rings carved out of stone, with no joints, hangdown from the corners of the entrance. These rings look like bangles, so the Mahadhwara is known as ‘Bale Mandapa’. Bale means bangles in Kannada.

The Gaurishwara Temple was built by a feudatory of the Cholas, Singadepa, who ruled this region in the sixteenth century. Devabhupala, as Singadepa was known, built this beautiful temple in 1550 AD. Somehow, this temple was not maintained well and was allowed to get into a dilapidated state within a period of 100 years. But in 1654-55, it was rebuilt by Devabhupala’s grandson Mudhabhupa.

How to Reach Chamarajanagar

The nearest airport is at Bangalore. Chamarajanagar has a new railway station inaugurated when the railway track was upgraded to broad gauge from metre gauge in November 2008. From the state capital Bangalore, the State Highway 17 can be used to reach Chamarajanagar via Mysore, Chamarajanagar is at a distance of 65 km from Mysore. Karnataka State Road Transport Corporation (KSRTC), connects this state to all other major cities and states.