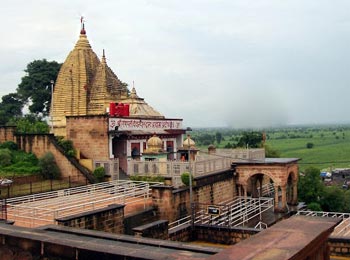 Adasa Ganesh Temple, as it is popularly known, is situated in Adasa, a small village at a distance of 43 km north-west of Nagpur on Saoner- Kalmeshwar road. It is well-known for numerous ancient and glorious temples. The main temple is the ancient Adasa Ganesh Temple. It is one of the eight Ashta-Vinayaks in district of Vidarbha.

This temple follows Hemadpanthi style of architecture. The stone idol of Lord Ganesha is about 12 feet tall and 7 feet wide and is believed to be a swayambo (self- evolved). Next to to the Ganesh Temple, there is a temple dedicated to Lord Shiva who is known as Trambakeshwar. The temple also has shrines of three swayambhu lingas, which have emerged from the soil, when the place was dug up to build the temple. Apart from this temple, there are about 20 other minor temples found within the premise which is spread around an area of 10 hectares of land. The minor temples include a shrine for Durga, a shrine for Kalbhairava, and two Temples of Hanuman in reclining and standing position. The temple grounds are peaceful and scenic. The foliage of the place adds to its tranquillity.

The Adasa Ganesh temple draws many thousands of believers during the festivals of Ganesh Jayanti, Ganesh Chaturthi and Angarak Sankashti Chaturthi Vrat.

Lord Adasa Ganapati fulfils all the wishes of the people who visit to worship him.

How To Reach Adasa

To achieve Adasa from Nagpur standard transports are effectively accessible.